My last blog posting was about a fishing trip to the jungle to catch peacock bass, and some people said that it appeared to be easy and go rather perfectly.  Here’s the real story.

We left Michigan on a Thursday at 5:35 a.m., arrived in Miami for a lovely afternoon there, then got up at 2 a.m. to catch a plane to Manaus, Brazil.  We reached Manaus before noon and it was 90 degrees, which, considering the balmy 25 chilly degrees we left in Michigan was a wee warm for us.  We sweated our way through customs, retrieved our two 30-pound duffel bags and saw a fella with a sign that said “River Plate Anglers” which is the company we booked with.  We heard him say his name is John, and his job is to guide us safely from the airport to the motel.  He led us to a van which we rode about 25 minutes to our motel, the Tropical Manaus.  We checked into the motel and walked what seemed like a quarter of a mile to our room.

Once we got to our room the first thing I noticed:  two twin beds.  How romantic.

Before I could unpack, Mark decided I needed to experience some of the local culture and hired someone John knew to take us on a private tour of Manaus.  Now, Manaus has 2 million people and well, after 18 years of marriage, I thought perhaps Mark knew I’m not big on big cities and that I prefer to wander around outside the lovely grounds of the motel and photo birds?

We had exactly 10 minutes to take photos before we were picked up by a guy whose name might have been Vilmar, which I’m not likely spelling correctly.  He drove us in a car that wove easily in and out of the traffic and down some side roads.  I liked that the necklace on his mirror swung back and forth as he weaved around.

After whizzing around, stopping at an outdoor market and bargaining for a rare parking spot, we got a tour of the opera house.  It’s a famous spot in Manaus and if you’re into things like this, you’ll probably like what you see here.  If you’re like me, you go, “Hm.”

We went into another room of the opera house, and if you’re like me, “Hm.”

It was late afternoon by now, and since we did not have lunch, I asked if perhaps we could find an ice-cream cone?  One has to eat ice-cream quickly in the 90-degree heat and I had no sooner snarfed my cone when we headed to the city market.  Immediately I realized it was a bad idea to have eaten anything, because in addition to some small booths with fresh fruit, there was a booth filled with thousands of small, dead shrimp, and a huge area with fish, none of which were refrigerated or on ice.  They were all just lying there dead.  And there were fish parts on the floor.

Mark was intrigued, of course, and he made me take lots of pictures, including one of this guy who was salting his fish bits to preserve the fish.  Truly, I have taken refrigeration for granted. 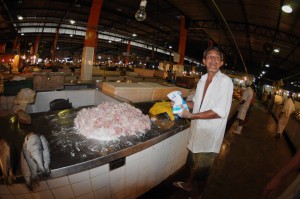 The air in the market was quite memorable, and with a few flies buzzing around, I was delighted to see daylight and step into the sort-of fresh air.  Across from the market we saw these colorful boats docked on the Amazon River.

Our tour continued hither and yon to a few other places in the city which I barely recall.  At about the time I was smelly as a dead fish and tired to the point of staring stupidly, Vilmar dropped us off at our motel.  It was dark outside as we wambled inside and down the halls the quarter mile to our room.  We showered, ate dinner, and after I set the alarm for 2 a.m., I waved good-night to Mark and fell fast asleep in my twin bed.

As usual, so funny! Love your stories. Hope there was at least a little bit fun in all this. LOL