The Alma College’s New Zealand Experience was designed by my husband, Mark, and his coworker, Mel, to expose students to the culture, geology and wildlife in New Zealand.  I got to go along in 2006, 2008 and 2010 and flunked all three times.

These are some of the NZ land birds we saw.  By my definition, land birds are birds that hang out by or in the land most of the time.    Below are some photos and tidbits I learned from my trips,  the Field Guide to New Zealand Wildlife, an excellent photographer in NZ named Matt Jones, and Mike Bishop, a.k.a. BirdNerd, from Alma College.

The bellbird is a New Zealand native whose songs include notes that sound like they were made in a tube.  It also makes squawks and beautiful, melodious shrills.

In the photo below, the bellbird has a seed in its beak which should make it from the seed-eater family.  Instead, the bellbird is a member of the honey-eater family.   I found seed-eating, honey-avoiding bellbirds in many places in New Zealand, from the native bush to some small trees in downtown Te Anau.

Another member of the honeyeater family is the tui.  I saw several tuis eating seeds, too, and never any honey.  This bird is also called the parson’s bird because to some, the two curled white plumes on their throats remind people of a parson’s cravat.

To some men, the two white plumes apparently look more like fuzzy boobs, and I say this because we found these “Boobie Lures” (fly fishing flies) in a small town near Waitomo on the North Island.

Regardless of what people might think about when they see tuis, the variety of song it sings is amazing.   The other thing I love about this bird is that from a distance, it looks mostly black.  Yet up close, you can see the metallic purples, blues, greens and browns…especially when the bird is posing in an enclosure with a red background.

We saw tuis in a variety of habitats throughout New Zealand.

The New Zealand pigeon is remarkable because it looks like an American pigeon on steroids.  In fact, it’s seven inches taller than the typical US highway pigeon.  The NZ pigeon primarily eats seeds and can be found throughout New Zealand.

The one below approached me in a park in Christchurch.  Check out its big white belly and pantaloon legs.   He looks like he means business.

There are several finches in NZ, including the greenfinch, the goldfinch and the chaffinch.  This is a chaffinch.  It’s supposedly found through NZ, however, during my three visits to NZ I only saw two chaffinches and had a terrible time sneaking up on one for a photo.  I finally got lucky with this one in a park in Arrowtown.  Chaffinches primarily eat seeds, but also insects and fruit. 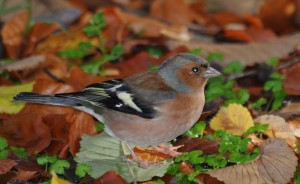 This is the red-crowned parakeet.  It was formerly common throughout NZ but is now confined to NZ islands such as Stewart Island.  This one was playing hide-and-seek with me while munching on a seed.  He held the rest of the seeds in his foot.

Unable to get a good close-up photo of the wild parakeet, I went to a preserve and used a long long lens to get a close-up photo that most people wouldn’t know was taken of a caged bird.  Until now.

The kaka is a parrot with a silvery white head.  Up close, it has a lot of color, especially on its cheek.

Mark and I saw several kakas on Stewart Island and they were all rowdy and having a good time.  Well, except this one.

The kea is another parrot.  The one below was waiting for us on the shores of Lake Manipouri.  His name is Stumpy because he’s missing part of one foot.   Stumpy likes chocolate and croissants.  I won’t say how I know this. 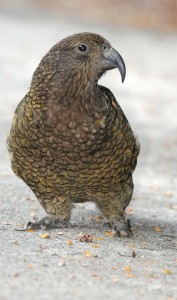 Stumpy with a piece of chocolate from an unknown source.

Nearby, hanging out on boat, was another kea.  He was younger than Stumpy and the local hadn’t named him yet.

The kea below had the audacity to hang out near a big sign that said, “Do not feed the kea.”  We therefore have no idea where the apple in the photo, below, came from.

The song thrush is a beautiful singer, song writer.  We found song thrushes singing in trees . . .

. . . and looking for tasty critters like worms, slugs, and snails in the woods.  Yum.

Another bird that makes a range of noises and eats a variety of critters is the Indian mynah.  It’s not a popular bird in NZ because it’s an import.

Magpies are imports from Australia and are so boisterous they woke me up one morning on the north island.   Some New Zealanders consider them to be pests.  In fact, one woman I talked to said that she gets bombarded by magpies when she hangs out her laundry.  I find hanging laundry to be pretty boring, so I’m thinking magpies would make laundry more sporting.

Like magpies, blackbirds can be found all over New Zealand.  They can also make a whole range of noises and song.  They slurp on worms, snails, slugs, insects, spiders and fruit.  This is the boy blackbird.

This is a girl blackbird.

Most New Zealanders love their fannies, or fantails.  These are inquisitive little birds that flit about, flashing their tails as they chase insects.

Getting a photograph of a fantail with its tail fanned out turned out to be harder than I thought.   I have lots of fantail photos showing their underside.  Underfanny?

This is the classic fantail shot, if there is such a thing.

According to newzealand.govt.nz web page, 20% of the fantails on NZ’s south island are black.  While waiting on the shores of Lake Manipouri for a bus to take us to Doubtful Sound, I saw this black one.

Just for fun, I took another shot and zoomed in.  Kind of looks grumpy, doesn’t it?

The dunnock, or hedge sparrow, is another bird commonly found in NZ.

Dunnocks are sleazy little birds that can have numerous partners, so don’t watch them too closely or mimic their behavior.  They eat insects and occasionally, fruit as well.

Silvereyes are found throughout New Zealand.  These birds eat insects, nectar and fruit.

Grey warblers are New  Zealand’s second smallest bird and are found throughout the country.   They primarily eat insects.  In the Field Guide to New Zealand Wildlife, they are described as being dull grey above and dingy white below.  When is grey not dull?
The New Zealand pipit is interesting to watch because it runs and flicks its tail up and down while looking for insects and seeds.  It looks similar to the skylark but since I don’t have a picture of a skylark, you’ll just have to trust me on that one.

One of my favorite NZ birds is the tomtit.  We found them in beach forests at several locations, including near waterfalls, by our motel in Fox Glacier, and on Stewart Island.

It started raining and hailing after I took the above photo on Stewart Island, so I set my sights on another tomtit.  They are fairly curious birds, but they don’t wait around posing for photos.  The one below lit on a limb, took a look at me and flew off.

While female tomtits are pretty, the real object of my affection was the male tomtit.  He looks like he was painted.   Tomtits primarily eat insects.

Tomtits and silvereyes are both tiny birds–about five inches in height–but they’re gigantic compared to NZ’s smallest bird which is three inches in height.  It’s called the rifleman, which I think is a pretty big name for such a tiny thing.  These birds are constantly flitting about, resulting in photos that look something like this.

I chased this bird around a forest in the Mavora Lakes area for 15 minutes before it finally lit on a tree.

After I shot the rifleman, our bus driver, Bernard Spragg, waved me over to see this South Island Robin.  It was just sitting on the ground and didn’t seem to mind us taking photographs.

If you get to Ulva Island and see a Stewart Island Robin be sure to kick or scratch on the ground, because the Stewart Island Robin will go to the scratched spot to look for insects.  These birds get so close to people, a zoom lens is sometimes a detriment.  Robins are no more than 7 inches.

One of the real treasures on Ulva Island is the saddleback.   This bird measures just shy of 10 inches and uses its powerful beak to pry away tree bark in search of insects.  It was nearly extinct at one time and its distribution is limited to Hen Island and several small islands off Stewart Island.  It’s therefore quite a thrill to see one of these birds.  This is a juvenile–it doesn’t have its rusty brown saddle or its red-orange wattle.

The welcome swallow is like any other swallow–nearly impossible to photograph in flight–which is why I don’t have such a photo.  These birds eat small insects that they nab in flight.

How a country can have a bird called the sacred kingfisher and also people that are afraid of it or not care about it is quite remarkable.

But some of you are perhaps even more bothered by the fact that kingfishers sometimes eat fish and maybe should be on the NZ Water Bird page.  Had I seen a kingfisher anywhere near water, I’d had put them there.

Three other birds I would classify as land birds that I saw while in New Zealand:  the NZ falcon (which I saw flying alongside our bus), the brown creeper (which was creeping around way, way up in a tree on Stewart Island), and lots of harrier hawks.  I didn’t get good photos of the falcon or brown creeper, and the only shots I got of a harrier hawk was this one, shot out a window.

So that’s about it for the New Zealand land birds that I saw.  At this point, you should check out the New Zealand Water Birds page.  Or check out Mattjonesphotography.com.  Or read my blog postings.  Or buy one of my photo books by returning to my main web page and clicking on Buy My Books.