Our destination is a river mislabeled the Itapara on the map, above.  See, locals had printed so many of the above maps, they found no reason to correct the spelling and print good ones.  The river’s real name is the Tapera River and it’s a tributary of the Rio Blanca, which is a trib of the Rio Negro which is a trib of the Amazon River.  One might say we were going to fish the headwaters of the Amazon.

To get to the Tapera River from the busy town of Manaus, we jumped in a plane that had both wheels and floats. 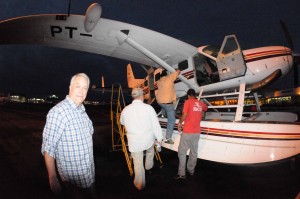 We flew across numerous stretches of river.

About an hour and a half later, the pilot saw what looked to me like a pretty narrow stretch of river.  The pilot circled once and landed on the water. 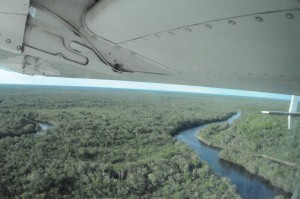 Waiting for us on the water were fishing guides in boats. The guides loaded up our gear and we rode off down the river for about a half hour before pulling up on the beach where our cabin awaited.

The inside of the cabin looks like this.  The two twin beds made things super romantic.

The cabin also contained a toilet and shower. The shower was a drizzle of water pumped in from the Amazon, but it did the trick.

After we settled in, we covered up from the sun and headed out into our boat with our guide, Preto.

To catch a peacock bass, one can use jigs, subsurface lures or large top-water lures. The one below is a top-water lure that you have to jerk and jerk and jerk across the water to annoy the peacock bass.  It was one of a couple of lures given to us by two great Texans that felt sorry for us after our first couple days on the river weren’t real productive.  The lure below turned things around for me in a big way and caught me more fish than any other lure.

What’s fun about the Amazon is that the jerking motion of a lure not only attracts fish, it attracts caiman.

With a caiman approaching, it’s quite amazing to see how quickly you can reel in a fish.

So every day for 6 and a half days, we fished from 7 in the morning until late in the afternoon.  Before the week was over, Mark and I caught 132 peacock bass, 14 of which were 8 pounds or larger.  My largest was 15 pounds.  My first big fish is below.

The next day I caught this fish.

About a half hour later, I caught this one.

My last big fish was caught on a different lure, and this fish hit so hard it busted my rod.  I’ve never reeled in a big fish with a small nubbin of rod in my hand in the rest of the rod floating on the surface of the water.