I start the morning by sending our last-minute dog sitter, Kim Bailey a text. She says the pups finally ate some food last night. She also says that Snickers now has kennel cough so she’ll make sure he gets meds like Winston. The good news is that Winston already seems to have stopped coughing.

We take our time getting up, showering, and getting to IHOP where a 65-year-old lady serves us because she’s the only person there who speaks English fluently. En route, we pass the tan cat we saw yesterday, so I order bacon with my eggs, toast and hash browns and take the bacon back to the kitty. He eats every bite, licks his paws afterwards and goes back to loitering outside the motel entryway.

We hang out in our room until I’m bored and need more interactions with other people.  At 2:00 we go by shuttle to the airport, and after checking in, get a message from one of our Texan friends, Curt: “Where are you?” as we eat a Cuban sandwich at Café Versailles near out gate. Nearby is a piece of history on the wall, which I find myself having to photograph.

We finish lunch and Curt and Bobby stroll up. Behind them is John, Curt’s son who’s 6 foot 6 and causes me to look for a chair to stand on so I can see him at eye level. During our chat, we learn John has stolen some of Curt’s lures, and I point out that it’s good John and Curt are fishing together. They laugh, and it’s great to see they have a great relationship.

We start boarding at 4:10 and get regular seats even though I thought we’d paid for upgrades with more legroom by an exit. I feel claustrophobic with the seat in front of me so close.  John sits across the aisle and I note that his legs are pressed against the seat in front of him.  He says he’s used to it.

I see a stewardess and ask if we can move to the two available seats by an exit and she says to wait a few minutes, which we do.  We end up waiting long enough for another guy to take up the aisle seat in that row. We wait and wait, and finally I ask another steward if we can move and he says, “Do it now so we can get underway.” We grab our stuff and step in front of the guy who moved before we did. We settle in, proud of our grab, and I’m about to unwrap my blanket when a guy shows up and says Mark’s in his seat. We’re about to get up when the man realizes Mark and I are together and offers to sit in Mark’s old seat. Phew! I’m so grateful for the extra inches of leg room—and in my case—a few more inches of space between me and the seat in front of me.

The guy next to Mark is from Brazil originally, speaks Portugese and is on a fishing trip with a bunch of other guys.  They chat for a while and both start watching movies.  The movies on airplanes make me woozy–too much movement too close to my face–so I watch the in-flight info as we fly over the Bight of Aklins and Acklins Island.  We are served chicken salad with Ruffles, a Dos Equis and a brownie with nuts. I’m relaxed enough to wonder what a bight is and later discover it simply means a curve in the shoreline, or a wide bay formed by such a curve. Why not just call it the Curve of Aklins, I wonder? Bight this.

Near the end of the flight we are given cute little snack packs. Little did I know I should have saved some of the food for the ride home. 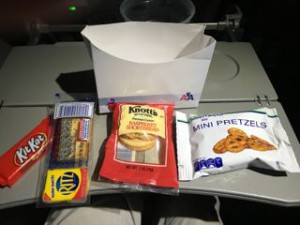 We land around 11:00 p.m. in Manaus, Brazil, and as we are finding our luggage, are greeted by Jon, the River Plate Anglers guy who escorted us to and from our motel in 2013 and who made sure we got a flight home in 2013 after our flight from the jungle didn’t pan out. Jon is in full beard and mustache and looks a bit wild compared to his clean-cut look. He remembers us from last time and I give him a hug.

Jon goes with us to the motel, and en route, we get introduced to the rest of the guys we will be fishing with.  We meet Dr. Bob, a veterinarian from TN, Steve, a banker from TN, Dr. Cozby, a dentist from TX.  They all seem like great guys and are livelier than I am after the long flight.

Jon gets us checked in and hands out keys to the room.  I discover I’m paired up with Bobby, because apparently, nobody knew Mark and I are married.  I switch keys, and Mark and I head upstairs…to the same room. 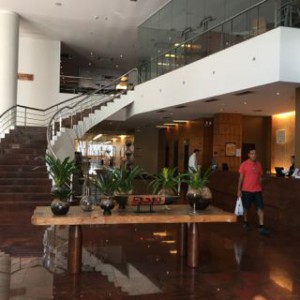 We’re at the Caesar Business motel in Manaus and all the guys love it because it’s closer to the airport than the motel we stayed at previously, super clean, doesn’t require a half mile walk to find one’s room like at the motel we went to in 2013, and the air conditioners hum and hum.  There’s also a nice little snack bar, and cold beer and water in the fridge. 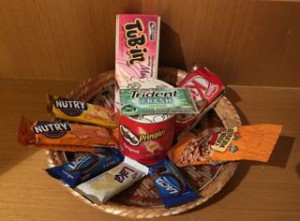 It also turns out the shower pours water like none other—the pressure is amazing—and everyone loves that, too. We are whipped and we don’t have to get up until 8 a.m. We set the fan on to run all night just in case somebody wants to start a party nearby for the third night in a row.  I sleep better than a baby.