I am up before 3:45 because Mark is rooting around the room, excited like a kid at Christmas. We get ready and are downstairs by 4:25 for that 4:30 shuttle we were promised.  There are 8 people in the lobby when the shuttle arrives at 4:55, which is close enough to 4:25 for all people except impatient ones like me.  We get dropped off at American Airlines and walk with our luggage about a half mile up and down several escalators to check in, all the while debating why we didn’t spend $5 on a cart to make our load lighter.  I have my giant yellow LL Bean bag with my initials on it from my Dad and Norma, and at 33 pounds, I can feel it leaving a nice impression in my shoulder.  On my back is my 9.5-pound camera bag and my purse–which I did not weigh–hangs off one shoulder. Mark has a small day-pack carry-on, and his mostly waterproof gray/black Columbia duffel weighs about the same as mine. My bag is an amorphous blob; his a nice, tightly zipped bag.

We check in at the kiosk and get boarding passes and luggage tags that the kiosk people think we’re intelligent enough to put on our own bags so early in the morning and with such little sleep. I carry my tag to the agent and he shows me how to put it on by doing it for me, which I count as a win for playing the helpless card. We get in line for security and an agent there tells us we have “quick check” status, which allows us to go through without removing our shoes or showing our liquids to the world. Mark gets patted down anyway due to his titanium knee, but the shortcut saves us at least twenty minutes in the normal line.

We find a small shop with coffee, bagel, cream cheese and bottled water and then head to gate D30 where Noah, a 4-year-old, and his 2-year-old brother, are testing their parents’ patience, and mine. I know his name is Noah because the mom uses it dozens of times to not get him to do what she wants.  In the woman’s bathroom, Noah has an all-out temper tantrum because he has to wait for his mom to finish peeing.   When she’s done, he runs out of the bathroom, down the hall a football field in length, and around the corner to his dad.  Mark and I cross our fingers that Noah et al are in the back of the airplane and/or heavily medicated.

At 6:35 we board, and it’s a full plane, yet people try bringing larger carry-ons than allowed, along with multiple bags. Four ladies are stopped at the door by American Airlines agents, and have to check their bags so they’re not consuming more than their share of overhead space. They are unpacking their “essentials” and repacking as we walk by.  I give the agents a nod because I personally dislike people that abuse the overhead luggage rule.

I end up sitting in seat 9E and am happy when Noah and family disappear in the back of the plane.  Next to me is a woman who introduces herself as Shawn Perry, who is from Grosee Isle, MI.  She knows my boss, Dina because she went to high school with Dina’s sisters. We have plenty to chat about after that, and I’m grateful for chit-chat because the 2.5 hour flight turns into 5.5 hours because bad weather has us circling the Miami area over and over again.  In rare peaks through the thick clouds, I find it really disconcerting to see ocean below us…because Miami is on land and we are supposed to land on land at some point, I’m hoping.  I find myself reaching for my life jacket so I know where it is, and also reviewing the number of steps to the exit door.  Not that I worry or anything.

Hours later, low on fuel, we fly into West Palm Beach, only to wait for a half hour for the fuel truck to show up.  Once refueled, we turn around and fly back to—and finally land at—Miami. Many people miss their connecting flights, including a couple across the aisle from us who will not get to the Dominican Republic until the next day. I’m not sure if Shawn got out to Cancun, but my sympathy for her was impaired a bit, because she had driven from Grand Rapids to Detroit at 1 a.m. this morning to get a flight out of Detroit instead of flying out of Grand Rapids….just to save $100.  And she’s a lawyer.

We find our luggage in Miami and hump upstairs and outside into rain with wet luggage. We use our new iPhones to call the motel and wait 20 minutes for a shuttle whose driver came from Cuba 15 years ago. Mark chats with him in Spanish during the 25 minute ride to the motel.  Traffic is horrible and I wonder why anyone would want to live here.

We get to the Holiday Inn Express at 3:00.  After a nap and shower, I text Aby to ask what I should wear to dinner with our friend, Curt, and his wife.  She says a dress and diamonds.  I text back that I’m stressed about which diamond and dress to wear.  I tell her all I have is fishing shirts anyway; she says it’s most important that they like me, which stresses me out even more.

We met Curt in 2013 on our first trip to the Amazon, on the Itapara River, and for some reason–in spite of us needing to ask him and his pal, Bobby, for Band-aids, a flashlight, Cipro, and money to tip our guide– they invited us on this trip.  We are very grateful to them for the opportunity.  We text Curt and am amazed he’s willing to drive 20 minutes in nasty traffic to pick us up for dinner!

Curt and his wife, Peggy, arrive at Curt 5:15. Peggy is a soft-spoken, pretty woman who, amazingly, is not wearing a fishing shirt. On the15 minute drive to Versailles, a Cuban restaurant, we learn that Curt and Peggy drove from Texas with their two small dogs, both of which are at their condo. Peggy stays at the condo while Curt is off fishing and on his other excursions, including two skeet shooting events hither and yon after we get back. Peggy and Curt share photos of their little mutts and tell us how each dog came into their lives.  We tell our story of driving 9 hours to pick up one puppy, only to come home with two. 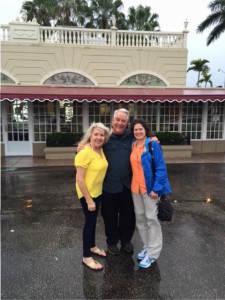 The Versailles touts itself as The World’s Most Famous Cuban Restaurant and THE place to go in Miami for Cuban food. Established in 1971, it is the gathering place for tourists and exiled Cubans. It’s a pleasant atmosphere, and it’s early enough in the day that we are seated immediately. Mark and Curt rave about their “split pea pottage,” a pea soup with ham and Spanish sausage.   I order Boliche (Cuban style pot roast) served with Moros rice and sweet plantains, which is amazing. I also order a Hatuey, which is a Cuban style ale and something one might say when one sneezes.

Everything is tasty, including the bite of Key Lime pie Mark insists we all share.  When we’re stuffed to the proverbial gills and exhausted, Curt drives us back to the motel and gets out to say goodnight. He says, “This is going to be a great trip. I have lots of questions to ask Mark about dinosaurs.” We thank him for dinner and tell him we’re excited about the trip, too. Before he walks away, I point out a tan cat loitering outside the motel and ask if he needs another pet? He says no and both he and Peggy wave as they pull away. 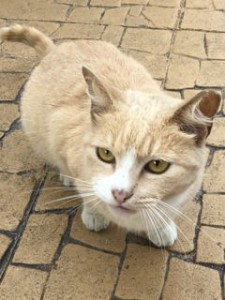 We’re in bed soon after and are about to fall asleep when a party starts near our room.  This time it’s a party with young, rowdy people speaking Spanish and hanging out a room or two from ours.  I turn down the temperature in the room,  turn up the fan to run constantly and fall asleep to the hum of the fan mixed with occasional outbursts of Spanish.