We’re up at 7:30—before the 8 a.m. wake-up call—and take a water-blasting shower in our room at the Caesar Business Manaus Motel.  We go down to breakfast on the mezzanine and find scrambled eggs, lots of breads to choose from, various cereals and lots of fruit, most of which I actually recognize. 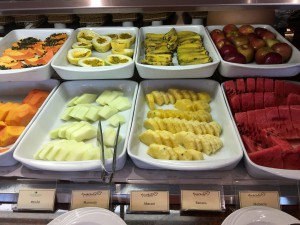 There are also three juices: orange juice, mango juice (we think) and what turns out to be cactus juice, according to the hostess.  Mark encourages another American to take a sip of the cactus juice; the look on the guy’s face makes it clear how awful it is.

We pack up and head downstairs for a 9:30 pickup by Jon, the River Plate Anglers rep.  Mark pays our bill and in so doing, chats with the ladies at the front desk. They are impressed with Mark’s Portuguese and says he has no accent, which tickles him pink.

At 9:30, we are happy when our our bags are checked through because the weight limit is 33 pounds and we might have weighed our bags half a dozen times before we left and still worry.  Mark’s bag is 32.5 pounds, mine 33.5 pounds, so they average out to to the max of 33. Phew!

We wait about 30 minutes for the plane to arrive and get gas.  Bobby takes a seat next to me after chatting on the phone and asks why I stopped blogging a year ago.  I mention how taking care of my mom changed priorities and kind of took the wind out of my sails.  He says his mom was sick with cancer and he took 3 months to help her through treatment. She’s fine now but it was a tough couple of months.  He shows me several photos on his phone including some terrific nature photos, including photo of one of the giant bucks on his ranch eating a cookie. He raises large bucks for others to hunt, but this one particular buck is one he calls “My buddy.”  Bobby’s a super nice guy.

We’re told to load the airplane and wamble outside into what so far is a pleasant morning.  Being crammed into a confined space and unable to wiggle is my least favorite part of the trip, and it’s made all the worse if it’s hot and if the pilot looks like the young fella that crashed the plane in 2013.  Luckily, it’s not hot and the pilot looks to be at least 16. 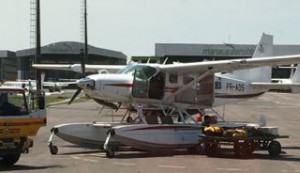 Yet, I can’t help but wonder if he’s reading the instruction manual. 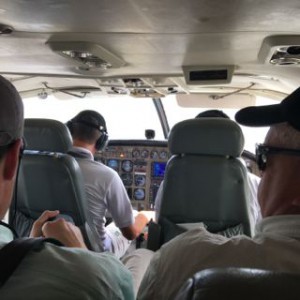 After telling us to put on our seat belts, the pilot cranks up the engine and taxis us down a long stretch of cement.  After waiting for a private plane to take to the air, the pilot gives us a “thumbs up” and we take off without issue. I am happy there’s a co-pilot because on our last trip out of the jungle in 2013, there was no co-pilot unless you count me.  I got to sit in the co-pilot’s seat and just about pooped my pants when I looked over to see our pilot filling out paperwork.

The first part of this flight is a bit bumpy as we leave the buildings and roads of Manaus behind and fly over the Amazon River.

Soon we rise above the clouds and fly over a large tributary of the Amazon.

The flight smooths out and waters below us get smaller and more wiggly.

Now, not to sound worrisome or anything, but I can’t help but notice how much the pilot chats and gestures with his hands, as if flying is secondary to the conversation. I keep an eye on him and the co-pilot the entire time, ready at any point to say, “Com licenca,” which is Portuguese for “Excuse me. ” I’m not sure what I’d say next except to point out that they should pay attention…even though the plane is probably on auto pilot.  Darn my worry gene.

At a point close to the hour mark, we start a slow descent, and I know this because the trees start to look more like trees than a painting.  Soon we see a boat and what we figure are our floating cabins.

The pilot circles, slowly at first, and then–in a swift motion that has me thinking religious thoughts–he turns tightly and we end up smoothly on the water. Guides show up with two small boats to take us to camp, while other camp staff show up in another boat to get our luggage. We ride the short trip to our camp, which consists of several floating cabins tucked into a tiny bay.

Once we’re on solid ground, we meet Alejandro, our camp host. He’s short, bald, wiry and looks tough as nails. He speaks Portuguese, English and Spanish, and after a brief introduction points to our cabin, cabin 6. We note that cabin 6 is between cabin 1 and 3 and he says that 6 is actually 2 in Portuguese and laughs. We learn later that Alejandro is from Chile, climbed mountains while in the Army back in the day and is knowledgeable about the flora and fauna of the Amazon. He was a former eco guide.

Alejandro shows us around the cabin, which is less rustic than the one in 2013. It’s whiter, brighter, newer and super clean.  The two twin beds look new and comfy, and you might imagine twin beds are super for a romantic week in the jungle! 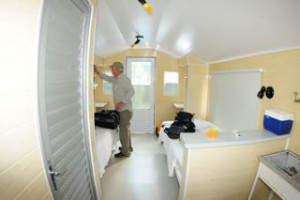 The air conditioning is solid and not rattling and there are plenty of water bottles in a cooler by the door.  LED lights are used throughout. 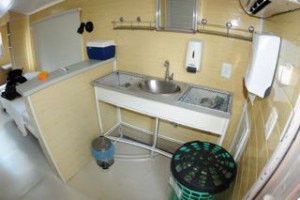 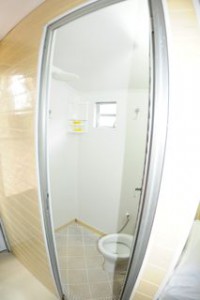 We unload our stuff and have lunch, which is red beans and rice and a bit of salad. We get our gear set up and are introduced to our guide, who goes by Sappo. He knows little English and Mark immediately starts in with the Portuguese he’s been studying via Pimsleur and a free mobile app, Duolingo. I have studied, too, but not to the extent Mark has, and about all I can muster up is a nod of my head and “Ola!”

Sappo is a nice fella and reminds us a little of Preto, our guide in 2013—dark haired, dark-skinned, and built like an Army tank. Sappo takes all our rods and reels and loads them into the boat, along with several boxes of lures we brought with us. In the bottom of the bow is my dry bag with my camera, zoom lens and fish-eye lens, along with important things like duct tape, toilet paper, pills and Epi-pens. My rain coat is thrown under the bow of the boat, ready to grab.

We fish hard all afternoon and catch our first Popoca, a new species of peacock bass for us.  It looks a little like this, as does Sappo, for that matter.

We spend the rest of the afternoon “ripping” top water baits, yanking Yozuris and doing a bit of jigging.  We end up with only nine peacock bass, but one is a ten pounder I pull into the boat. 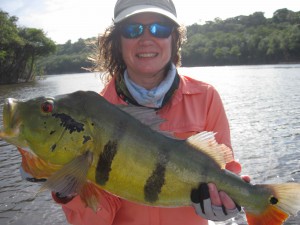 We also catch a Jacunda, which is a colorful fish.

Mark also has a knack for piranhas. 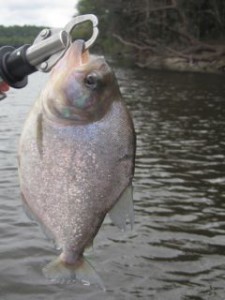 I am super hot after an afternoon fishing, and am relieved to get into an Amazon shower, which is water pumped from the river. The knob above the shower head was for heat once upon a time, says Alejandro, but that didn’t work so well because all the visitors used the on-demand heat source at the same time and zapped the electrical current at camp. So they decided to revert back to the old way of just using river water.  It’s what we had in 2013 and the water is the perfect temperature for a shower.

Drinks are in the main cabin/dining room, consisting of beer, wine, a mixed drink, or a lime concoction that leaves ones’ mouth puckery. I take the latter and my lips pucker up like a fish. One by one everyone appears to chat about the day.  Sadly, it seems Mark and I were the lowest fish producers of the day.  Luckily, nobody kicks out out of camp.

Dinner consists of wing-dings, a meat filet with peppercorns, red beans and rice and tomato slices and lettuce.  As we eat, I learn more about Steve, the banker, from Tennessee, a guy who’s traveled on many a trip with Dr. Bob, a veterinarian, farmer and producer of the parvo vaccine.  Dr. Cozby, who goes by Coz, is an 82-year-old pediatric dentist fishing with–and keeping up with–Bobby, cast for cast.  Curt and his son, John, 30, round out the group.  John is quiet and polite and pays attention when Curt asks Mark questions about dinosaurs.  I love the evening chats.

We go to bed right after dinner and I am asleep immediately.