In July, 2105 Mark and I flew to Miami, checked into a motel and spent the afternoon lounging around a swimming pool.  The motel elevator had two buttons, both of which read “UP,” so we thought that was a good sign for the start of our trip.

Hours later, however, as were nodding off in anticipation of our early morning flight to Manaus, Brazil, JW Smith, the owner of the Rod and Gun Club called and said our trip was cancelled because the local people on the Amazon tributary we were scheduled to fish–the Marmelos River–had blocked the river with their boats and said no outsiders were allowed to fish their waters.  Negotiations had ensued for months prior to our arrival, but alas, they failed on the day the local outfitters had headed up-river.  Since the locals threatened to shoot us “outsiders,” and because we weren’t allowed to take weapons with us to make it a fair fight, JW thought it best to cancel the trip.

I’m here to tell ya that there’s nothing like looking forward to an adventure, only to have to return to work in a cubicle and carry on as if nothing happened.  That was tough.

But thanks to the excellent work on the part of JW and his staff, we were re-booked on a different river, the Xeruini, the end of January 2016.  Two days before we were to leave, JW called and said that the water levels on the Xeruini were so low that getting a float plane and the camp set up wouldn’t work out so well.  Instead, we were going to be fishing the Matapuri River, which is south of the Xeruini River.

Now, there are about 1,100 tributaries to the Amazon River and the reason we had hoped for the Xeruini was because a guy named Andre who worked for the Brazilian outfitters, River Plate Anglers, had told us in 2013  that the Xeruini was his favorite tributary.  But since some trips–like the one in July–are out-right cancelled, we were happy to be going anywhere at all.  To put this in perspective on a map, we were to be heading south of the capitol of Brazil, Manuaus, instead of north this time.  Geographically, we were to have fished pretty much on the equator; this time we were to fish about 2 degrees south of the equator, which is still hot for Michiganders. 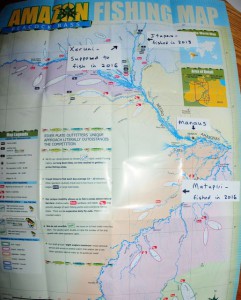 Indeed January in Michigan is a bit different than in Brazil, and there is no way to prepare for the heat of the Amazon except to take numerous saunas or long baths, neither of which we had time to do.  The only other thing we could do to prepare for our trip was to exercise, which, for peacock bass fishing, consists of using a dumbbell to imitate the motion of ripping a long lure across the water…for 8 hours or so a day.  Being retired and all, Mark had 8 hours with which he could wiggle a dumbbell around, but who would do that for such a period of time?  Righto.  Neither of us.

Since we’d already packed once for this trip in July, packing in January was no big deal, except for the fact that Mark kept adding lures he wanted to try…during the 6 1/2 days we’d actually be fishing.  My opinion was that we didn’t have time to try what he’d already packed, but more lures were added nonetheless.

The other part of our preparation for a big trip like this was developing a game plan for our pets.  We had already secured the services of a young woman by the name of Hannah to come in to take care of our two cats, two tanks of fish, Smokey Joe (the rescued mouse) and Buddy, the mynah bird.  Our plan also included taking the dogs to their favorite place to play called Nana-N-Paws. 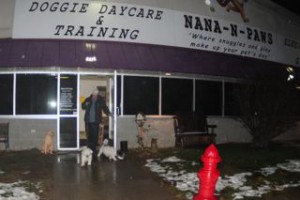 Two days before we were to leave, however, I came home from work to find Winston coughing and gacking forth this frothy, yucky stuff.  Since we’d dropped him and Snickers off at Nana-n-Paws about 10 days earlier, we suspected Winston had kennel cough.  I called our vet, we took Winston in at 8 a.m. the next day–the day before we were to leave–and the vet verified Winston had kennel cough.  The vet said, “No kennel will take him unless they have solitary confinement, and while that might work for Winston, you also have another dog that’s been exposed.  So, you need in-home care.”

As Mark and I began frothing about the complicated coordination of friends and neighbors who maybe could rotate in to take care of our pups, the vet said, “This isn’t common knowledge and we don’t normally advertise this, but some of our vet techs will come into peoples’ homes to take care of pets.”  Mark and I both went “Phew!’ and were introduced to Kim Bailey, a vet tech who offered to come in several times a day to take care of our pups.  Kim was to shows up at 8 or so in the morning, noon-ish, and at 9:30 or so at night just for the dogs; Hannah was to show up at five or six p.m. to care for the dogs and take care of the other pets.  Winston was to get his meds twice a day, and both Kim and Hannah had a hand in that.

With that figured out, the only thing left to do was go to work for the rest of the day–Tuesday–and spend the next morning cleaning the house.  At 3:00 Wednesday, we could think of nothing else to clean, so left our furry, feathery and fin-ny charges and headed towards Detroit.  We got a half mile away before I realized I’d left my Epi-pens and Mark realized he didn’t have some plastic tubing that would help with our fishing somehow.  Back we went to grab our stuff, pet the pets one more time and head out again.

We stayed at the Days Inn in Detroit less than a mile from the airport.  They promised a shuttle to the airport at 4:30 a.m. the next morning, and for $130 gave us a place to sleep and safe parking for our car for the 10 days we’d be gone.  We dropped our bags in our room, headed to the bar/restaurant and had an early dinner and some beer.

The bar/restaurant was freezing cold, and and as I airplaned my way to a warmer spot in the bar–arms out like wings and circling the room looking for a warmer spot–a guy by the name of Keith Smith noticed and introduced himself.  He was from the state of Maine, he said, in a town over an hour from “Bah Hahbor.”  He works as a truck driver of a “cah carrier” and he was in Detroit to get his truck serviced and a new load of “cahs” to deliver in another state.  We chatted with him for hours, learning things like the story behind Burt’s Bees and how Burt was just a bee-keeper until a woman came into his life, turned him into a success story and then–some opinions go–took him for everything he had.  Here’s the story on that.

We were in bed by 8:30 and sleeping well until a rowdy troupe of weedwackers (e.g. bad people) showed up around midnight with the intent of having a wee party right outside our door.  They clanked the pop machine (which was right outside our door) and the ice machine (ditto) and stood around debating important things like who was going to sleep in which room, and which kid was really tired enough to sleep now and which was not.

I got up, turned the fan on to run full-time, as as I returned to bed, noticed that the comforter was upside down and the tag was right in my face.  Too tired to flip it around and wake up Mark, I folded the tag under my chin and went to sleep.