I am all for the idea of celebrating groundhogs and actually having a day where we take a few moments to see if one particular groundhog sees his shadow. The thing is that Punxsutawney Phil, the groundhog we put so much faith in, is a pet groundhog which is likely removed from some comfortable hole or house or something, and taken outside for a brief moment in the chill of the first Monday in February to see if he sees his shadow.  If he were a wild groundhog in Michigan, he’d be out of his mind to even step out of his hole for even a second.  See, it’s been like 20 degrees around here lately.  And yesterday, we got over a foot of snow.

In spite of the snow coming down all day yesterday, our deck was visited by a bunch of critters which came to fill up with corn and sunflower seeds before the storm.  Five cardinals showed up, which is a new record for us, including the two, below.  Along with them:  dozens upon dozens of chickadees, sparrows, finches, a flicker, woodpeckers and a sudden appearance of a flock of starlings.  Point is, there were a lot more birds at my house the last two days than groundhogs.  But who’d want to see if a certain bird saw its shadow this time of year? 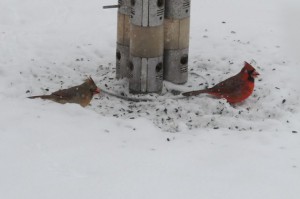 While the birds were eating their fill, some squirrels showed up, including this one. 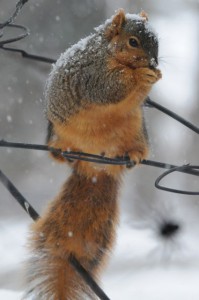 I liked him a lot. 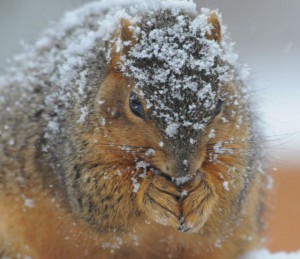 So I took lots of photos of him. 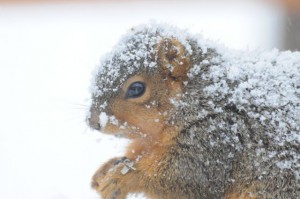 Based on numbers alone, today would have been better off being named National Squirrel Appreciation Day.  But that day was celebrated a few weeks ago.  Point is, there were a lot more squirrels running around yesterday and today than ground hogs.

We also have a bunch of muskrats coming to our yard to eat.  Consider this group of three muskrats pigging out together before the storm.  But who, besides me, would support a national muskrat day to celebrate these guys? 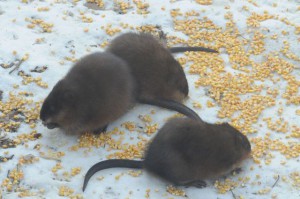 This morning I woke up to this view out our bay window this morning. 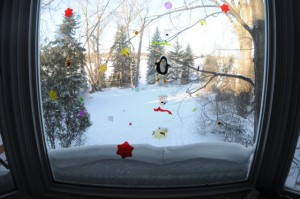 The birds continued to come in, including this dove, which hung out near our brush pile for a while first. 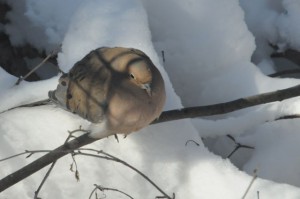 The muskrats actually pushed their way from the waters’ edge through the snow–sometimes on top of it, sometimes under it–to get to our backyard today.  Another compelling case for national muskrat day.  And he even saw his shadow for real. 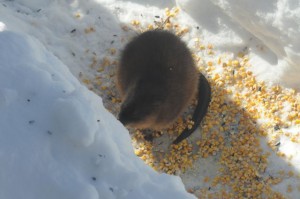 I also saw deer tracks in the backyard.  But we seem to celebrate deer by shooting them in the fall.  So it’s not like we could call this national deer day or anything.

Later, as  I drove to go cross-country skiing, I saw turkeys crossing through the snow.  But we celebrate turkeys on Thanksgiving…by eating them.  So nobody would vote for this being national turkey day. 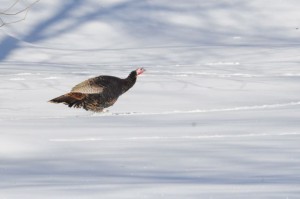 So after great deliberation and a few wintry photos, I resigned to the tradition of calling today Groundhog Day in spite of the fact that the groundhog that was living under our deck–and may very well still be there–is sound asleep like most groundhogs, and the fact that no groundhog except Phil, the pampered ground hog, would possibly see his shadow today. 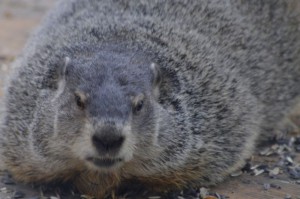 Hope to see you in the spring, our under-the-deck groundhog pal.