First, thank you all for being part of International Author’s Day on July 18 and entering to win the free copy of Something Furry Underfoot.  Congratulations go out to Bonnie H. for being the winner of the free, autographed paperback version.  Everyone else that entered can still nab an e-version of my book for 99 cents through the end of July.

Mark named the kitten Preto which is Portugese for black and also the name of our Amazon fishing guide.  The kitten was mild mannered, gentle and sweet.  The puppies loved him.  I couldn’t get over how black he is.

I brought my mom over to see Preto on Sunday.  She thought he was pretty nifty, too.

On Sunday, Preto woke up but didn’t want to eat.  He refused milk.  He refused water.  And when I picked him up, he felt really warm.  We drove him to the MSU Small Animal Clinic where the vet suggested blood tests to eliminate the potential for a fatal virus.  And because what Preto had might be fatal, he was taken to an isolated area in the Clinic.  The vet called later to say the blood tests showed nothing and perhaps we should do an x-ray (for like $150) and an ultrasound (around $330).  We countered, suggesting an antibiotic and call us in the morning.

We left Preto overnight.  The next morning, Mark returned Monday and paid the $700 bill at the MSU Vet Clinic (AAAHHHHHH!).  Yes, for emergency services, an IV, antibiotic, fluids, isolation, blood tests.  Gulp. Mark took Preto to the Haslett Animal Hospital where we knew we’d pay less than an arm and a leg per day.  There, Preto was given a new IV, different antibiotic, but his temperature remained the same.  Monday turned into Tuesday with the same results. Tuesday night, I asked Mark how much more he was going to put into this kitten.  Mark said, “I don’t know.  But when I drove him home, I told him I’d take care of him.”

This morning, Dr. Melissa Wyatt shaved various sections on Preto looking for a reason for his illness.  Dr. Wyatt shaved Preto here and there, looking closer, looking for reasons for his illness.  And then she saw it, a small hole in his neck where he’d been bitten by a botfly.  The life cycle of a botfly in a kitten or cat is the stuff of a horror movie, so I’ll spare you those lovely details.  I will share that it’s only the sensitive kittens/cats that develop a fever.  It’s just our luck that Mark brought home a sensitive kitten.

Thankfully, Dr. Wyatt removed the botfly today and–get this–saved it in a bottle for her vet students to see (which is something Mark would do!).  In fact, Dr. Wyatt is my hero, not only for solving this mystery, but because she removed a sewing needle from Purrkins’ mouth once, removed all of Little Dipper’s teeth over the course of three surgeries, and kept her doors open just for me when I brought Dusty in after he’d been attacked by a bulldog.

At home this afternoon, Preto took to the comfort of Mark’s lap.

Soon, Preto began eating the dogs’ food (in spite of his own food being nearby).

After he ate, Preto curled up in the sun for a nap.

Winston came by to make sure he was okay.

Snickers goes out of his way to be with Preto. 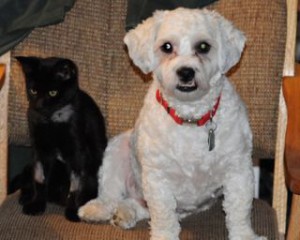 My book Something Furry Underfoot is all about taking care of and spoiling a whole bunch of different animals Mark kept bringing home.  Preto, who has already wormed–or shall I say botflied–his way into our hearts, is just the latest example of why there will always be something furry underfoot in my house.  It just happens.  And it’s always a good thing.

P.S.  Don’t forget–you only have until the end of July to enter the Petspage.com giveaway for lots of great pet-related prizes, including a free copy of my book.