Once upon a time, Mark decided to take his son, Arthur, his nephew, Terry, his good friend, Jack, and me, to Canada to go fishing. The location Mark chose was Kasba Lake in northern Canada.  For months prior to our August 1 departure, new fishing lures arrived in the mail to my house about every third day.  When it came time to pack, Mark realized, “We have more lures than we can possibly use in eight days.  And if we took them all, they’d weigh more than the 50 pound limit we can have for luggage.”  Packing was a lot of fun.  I think we weighed our bags four times.

To get to Kasba Lake one must either first fly or drive to Winnipeg.  Since Mark and I had spent a small fortune on fishing lures, some of which remained home, we opted to drive.  Lucky for us, Jack had spent his money on a brand new Chevy Traverse, so Mark, Arthur and I loaded up in that and drove and drove and drove to Winnepeg.  There, we met Mark’s nephew, Terry, and hopped onto an airplane that took us further north.

We took some small plastic bottles with us to take the edge off.

At the lodge we were fed a yummy breakfast.  Note the fine accommodations.

Afterwards, we helped load up the float plane.  Luggage went into the floats and into the back of the cabin.

This is a view out the window of the float plane.  There seemed to be more water than land.

The pilot, Larry, told us the airplane had a great engine that would allow the plane to continue flying even if something went wrong.  How ominous.

While Jack sat in the co-pilot seat, Terry, Mark and I sat in a middle row seat, and Arthur sat in the back with the luggage.

About twenty minutes after we took off, we landed on the water and tied up to a dock in front of our outpost cabin, which was our home for 8 days.  It’s on Tabane Lake.

The cabin was made of plywood, with a screened-in porch decorated with a lot of duct tape.  Duct tape held the glass onto the front door, duct tape held the bits of screen together where a bear had punched it in a year earlier, and you can see duct tape on the ceiling in the photo, below.  The cabin consisted of one main room with 4 bunk beds, a stove, fridge and sink.

The bathroom was a tiny affair.  The shower dripped the entire time and the one side was so flimsy it could probably be pushed down by a hoard of black flies.  But, as Mark said, at least we had indoor plumbing–on a previous trip, we had an outhouse.

Food and beer had been left in coolers and in the fridge.  We soon learned that in Canada, a case of beer is only 15 beers, whereas a “flat” of beer is 24.  We had to order more beer via satellite phone with Larry mid-week because of our wee misunderstanding (as in, “Bring in a flat, Larry!”).  Indeed, Larry flew in mid-week with beer, dish soap and other essentials, not including mustard, which Jack watered down so as to last longer. We were the last group to use the cabin for the season.

Our meals consisted of burgers on the grill, steak, and fresh lake trout, amongst other tasty food, compliments mostly of Chef Jack, with help from Arthur.  I must say that the Arthur-Jack rub on the steaks–consisting of Tang, coffee grounds, orange peels, and Mesquite rub–was simply amazing.

I soon discovered that some men snore at an amazing volume, and with the drippy shower as accompaniment, it was a bit too much for me.  I slept on the porch most nights.  The citronella candles mostly kept the mosquitoes at bay, adding their own symphony to the air.  The lovely cotton liner provided to line the sleeping bags actually stayed in place the first night.  After that, not so much.

Our eight day stay consisted mostly of fishing, of course.  Arthur hadn’t caught too many fish in his life, so we were all excited when he caught his first lake trout…puny little thing that it was.

And when Terry caught his first northern pike ever, it was cause for celebration.  But not as great a cause as when his second-ever pike was 41 inches.  Of course, Mark would later beat this fish by two inches.

In addition to fishing in the lake, we also explored three streams, one of which had killer rapids that tried to flip Terry and Jack, another of which took most of the way to get to, and another of which was kinder and gentler.  Everyone caught at least one grayling, none of which cooperated for photos.

The first few days of fishing were warm enough for a nifty dip in the lake.

But mid-week, the temperatures dropped and the warmer clothes came out.

Between bouts of fishing, I fell for a few of the local critters, including this rabbit, which may or may not be an arctic hare.

The rabbit did something I’d never seen before:  it took off swimming across the lake.  I held my breath the entire time it was swimming, knowing that a big pike wouldn’t hesitate to eat a rabbit.  Luckily, it circled back and returned to land about 500 feet from the lodge.  We still have no idea what it was doing.

I also fell for the resident jays.  They showed up the first evening and searched around the hull of our boats.  It didn’t take them long to find some trail mix that had accidentally fallen over in the bow.

I quickly discovered that the jays loved the nuts in the trail mix, but not the raisins or M&Ms.  That worked out great for me, because the raisins and M&Ms were my favorite.  So, I shared the rest of my trail mix with the birds.  I put some on the boat… 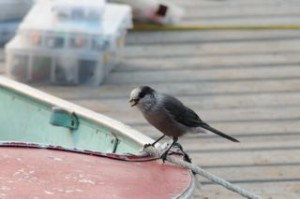 …and I put some on a burning barrel.  Jack took up the sport, sharing his walnuts and peanuts by making small piles on the ground.

Other birds we saw included a boreal chickadee, a redpoll, common loons, an arctic loon, eagles, gulls, arctic terns, three birds I will have to get identified by my Alma College birding pal, and this shorebird.

I also took time to shoot the smaller things…

…including the lichen and other macro-life.

And let’s not forget the fresh blueberries!

Of course, bears like berries. And we did see some bear tracks on another island.

In the arctic, the sun doesn’t set in August until around 11 p.m.  Most nights, it was worth staying up for the sunset. 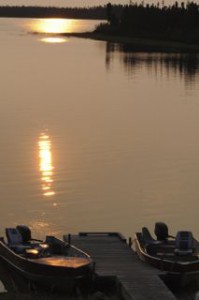 And sometimes, there were still things to do.

The week went by in the blink of an eye.  The fishing was fast and furious, especially for pike.  The overall size of all three species of fish–lake trout, pike and grayling–was smaller than Nueltin Lake and smaller than at the main lodge, where, at Kasba Lake itself, one lucky guy got a 36-pound lake trout.

But the numbers of fish kept things interesting all week.  As did the weather.

And Mark caught enough fish to get boo-boos on his fingers.  Poor fella.

On our last evening at the outpost cabin, the men smoked cigars, and we all tried to finish off the rest of the expensive beer we’d paid for.  That meant four beers per person.  Burp.

The next morning at 7, Larry flew in to pick us up in his plane and take us home.  It was rainy and the plane’s engine wasn’t as loud as when we took off from the lodge, making me a bit worried.  My worry gene was correct, and if you go to my FB page, you’ll see the hairy video flight back to Kasba Lake Lodge, where a cylinder blew on the plane.  Aaaahhhh!

Larry keeps a sign on the cockpit of his plane that says that “Tipping the pilot helps him remember where he left you.”  Upon landing safely with a blown cylinder, I gave Larry a nice tip!

After another great breakfast at the main lodge, we took the plane back to Winnepeg, which involved a stop-over at Lynn Lake to refuel.  At Winnipeg, we said good-bye to Terry, and Arthur, Mark, Jack and I headed to Jack’s car for the loooong ride home.  This is a parting shot from Kasba Lake Lodge.  Thanks, guys, for the great time!