Thanks to my squirrel-loving friend, Chris Johnson–who recently shared two very cute photos of baby fox squirrels with me–I was reminded that January 21 is National Squirrel Appreciation Day!  Now, there are people who like squirrels and there are people whose spouses arm them with Christmas gifts in anticipation of the year’s event:  for example, a soft blanket, a t-shirt and a welcome mat.

Hence qualified to write about squirrels, I must share that over the course of the last year, we experienced some very interesting things in the world of squirrels.  We saw a mother fox squirrel nesting in a nest box in our front yard, but we didn’t see her babies until one day, late spring, when she guided them across our roof and onto the fence on the left side of our deck.  There, she tried to entice them onto the deck, which is usually flush with sunflower seeds.  As I took photos of the two babies with their mom, though, I realized that one of the baby squirrel’s tail was injured, as in chopped off.  We named the squirrel Stumpy.

While the mom jumped down onto the deck to show the two babies how to stuff one’s face with sunflower seeds, the two babies would not budge.  When one of them made a squeaky type noise, the mom ran back up the fence, nudged the one baby, then seemly wrapped her arms around Stumpy.  We felt we’d witnessed a very tender moment in the world of squirrels.

Moments later, she guided the babies off the fence, back across the roof, to their nest box in the front yard.  We didn’t see the family again for about two weeks.  When we did, it seemed Stumpy’s tail was healing over!  Mid-summer I took this shot of Stumpy.

In the fall, on another box in our front yard, we saw another touching moment between mother and baby squirrel.

Our yard is also home for a gray squirrel, which is sharing a box with two black squirrels.  She appeared as a young squirrel and is now rather, well, matronly. 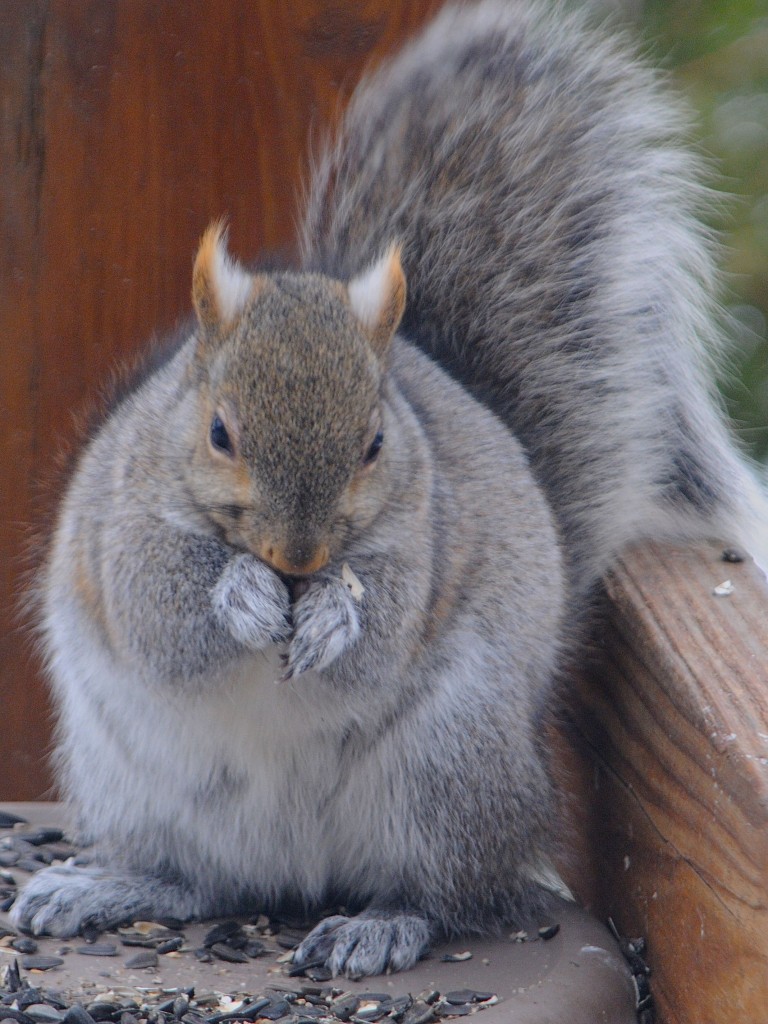 We also are visited by her black squirrel friends.

I captured this photo after we shoveled the deck off for our pals, during a light snow.

And this fella showed me something I’d never seen before.  He was eating the snow, but it looks from the photo as if he was preparing for a snowball fight.

Our yard is also visited by squirrels that seem to be a mix of colors.

Today we saw six baby black squirrels emerge from a box in our backyard, along with their mom.  Soon, they were racing up and down our cottonwood and creating disharmony for the nearby, resident fox squirrel.  Below is a photo of six of the family members.

So happy National Squirrel Appreciation Day, all you fellow squirrel lovers!  Oh, and remember, this day was chosen because food sources for squirrel are at their lowest.  Don’t forget to put out some sunflower seeds or corn for your fuzzy pals.

I enjoyed your squirrel photos and shared the link with Linda, a wildlife rehabilitator, who has raised many orphaned squirrels, some of whom were released in our cathedral oak when we lived in the country.