If you know Mark or read Something Furry Underfoot, you probably realize that when it comes to pets Mark is rather uncontrollable–he blinks and another new fuzzy shows up in my house.  So, it probably won’t come as too much surprise that Mark went exactly three days without a dog in the house before he went online in search of lasa-bijon puppies, which is what Dusty and Little Dipper were.  On Sunday morning, he found exactly one breeder with such puppies, and he fell immediately for a four-month-old black and white dog named Lucky.  It didn’t matter that the breeder is in Pennsylvania.  And it only mattered for 24 hours that the breeder is Mennonite and didn’t answer Mark’s email on Sunday.  But it was all good on Monday morning when the breeder emailed Mark and said that Lucky was indeed still available. 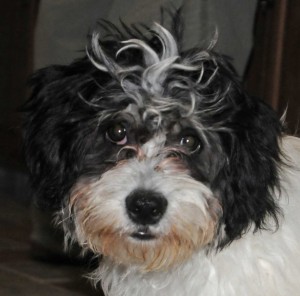 So what is a spouse to do?  Leave work at noon on Monday, drive to Pennsylvania, stay over at a Super 8 motel, eat bar food at a place known for giant hamburgers, and finish driving a dozen gnarly twisty, windy roads the next morning.  We arrived at 9 a.m. on Tuesday at this beautiful farm with free-range chickens and well-pampered pups, including Lucky.  The owner, Erla, was a sweet woman, quite laid-back, and we quickly saw her personality had rubbed off on Lucky, because when she brought Lucky out from the back of this small building, he sprawled out unmoving and looked at us with big brown, very scared eyes.

So there we were, hundreds of miles from home, looking at a paralyzed puppy that didn’t seem to have all his wires attached.  Fortunately, in the background came the yelping, barking noise of other puppies, so Mark mentioned that perhaps Lucky wasn’t so lucky and perhaps there was another one we could look at?  Perhaps Lucky had a brother or sister, I asked?  Seconds later, this wiggly, tan and white puppy named Lance was running circles around us.

And then it happened:  Lance nudged Lucky, and soon the two were romping around the room, wiggling all over, licking our hands, then running off together .  As we watched them play together, Erla mentioned that she’d reduced Lucky’s price because he was four months old.  And she said that Lance, who is Lucky’s brother, well, his price was reduced even more because of a scratch on his eye.  I looked at Mark, he looked at me and we agreed that because Lucky seemed to need Lance, we couldn’t separate them.  So we bought both pups, two collars and leashes, and packed the pups into the car.

Over the course of the eight hour drive home, Mark and I agreed we weren’t thrilled with the names given the pups.  We contemplated lots of other names as we rolled along, and rejected all of them:  Whiney and Drooly, Barfy and UpChuck (as both of the pups got sick on the floor), Shock and Awe, and Sleepy and Dopey.  None seemed quite right for our pups.

We were home by 5:30 on Tuesday and soon the puppies were adapting to their new home and their strange new owners.

Both puppies are doing very well. 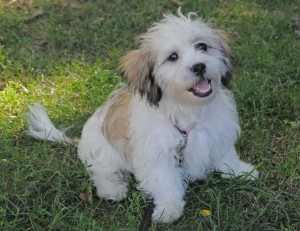 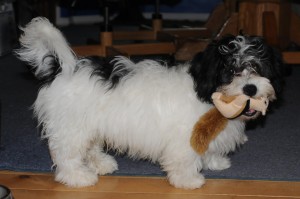 But it’s quite sad they don’t have names we like, so we need your help.  Simply respond to this blog posting, and if the name you provide for either pup is selected by Mark and me, I’ll send you an e-copy or signed paperback of Something Furry Underfoot.  What could be better than that?  Oh, I know, two puppies! 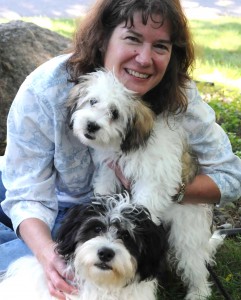 Congrats with your new boys! Saw you contest on twitter.
We have a dog my husband rescued almost two years ago now. She was very thin, riddled with fleas, but very alert. My husband was working outside on a clients property and she kept coming up to him throughout the day. On asking the client about the dog he found out that it belonged to their neighbor three doors down and was always outside. After finishing his work, my husband went to see the dog owner and asked if he could take it away. The owner said he was glad to get rid of it. Turns out to be the loveliest little dog we have ever had. On the day we named her Jessica (her name had been Spot), I like that name but and your black and white puppy looks a little like her but of course you can’t call a male Jessica, well you can but it might cause some confusion.
I would name your white and tan puppy Bisou (meaning kiss in French) and your black and white puppy Logan (meaning small hollow in Scottish).
Hope I win 🙂

How about Rico and Chaco?? 😀

Emma says the black one should be named “Spike” because he has the best puppy mowhawk she’s ever seen. Still working out the tan one.

William and Winston (the tan and white).

They are so cute!!!
Light one: Blanco
Dark one: Floppy -cuz he flopped down on the ground 🙂

well I may not qualify but I like Repeat and Reload. hehehe

love the new pups. cant wait to see them in person. I am going to call them Repeat (pull) and Reload.hehehe

They are adorable! I quite like Munchkin (or Munchie for short) and Lollipop – a vague reference to the Wizard of Oz, haha!