In my book Something Furry Underfoot are 50 tips, two of which are particularly relevant today.

A little over 15 years ago, Mark came home from a pet store gushing about this little white frou-frou puppy that was scratching madly at the corner of its cage “as if he was trying to get my attention.”  A few days later, we went back to get the puppy Mark named Dusty. 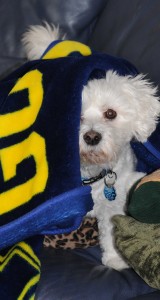 He was pals to all the other animals that came into the house:  Little Dipper, Purrkins, eight different ferrets, a rabbit, a domestic duck.  Dusty didn’t even mind when a hamster ball ran into him.

Over the last several months, our 15-year-old pal needed more and more help getting around.  Even the special extra steps we put in for him weren’t helpful enough, so we lifted him up and down the steps.

This morning, for the first time ever, Dusty let out a yelp at 5:15 a.m.  We got up, helped him outside and after wobbling back in with our help, he plopped back on the floor and just sat there, breathing shallow breaths. I offered him his soft Beneful food and he ignored it.  I broke apart pieces of a leftover pork chop and he ate, but slowly.  I snuck a pain pill in a piece of pepperoni but I could tell he was not his same old pups self.  Then I looked into his eyes and saw this far away look, a look of pain?  And I knew.  I called the mobile vet; they said they could not arrive until 4 p.m.

The rest of the day went slowly.  I picked my mom up so she could say good-bye to Dusty, then drove her back home.  We let Dusty out and sat with him in the grass for a half hour or so until he decided it was time to go back inside.  We helped him back in, put the water bowl in front of him when we thought he was thirsty, and gave him little treats.  His breathing stayed shallow and quick and with each passing hour, we knew we’d made the right decision.

We took a few more photos, too.

In the afternoon, Dusty decided to go outside one more time.  We sat with him the rest of the day as he napped, looked up, napped some more.  When the vet arrived, we said our good-byes right in the front yard.

When Mark first brought Dusty home he told me Dusty had wing nubbins where his angel wings had fallen off, and that when he died, he’d grow his angel wings again.  This is what Dusty looks like now.  It’s also the cover of the book that bears his name.

Farewell Dusty, the Angel Pup.  Thank you for all you did for us.

What a touching last day he had. And so good that you had time to say goodbye. Love you.

So true on the tips. My heart goes out to you and your family. You were fortunate to be able to share your lives with Dusty and he with yours.

what a sweetie Dusty was. he is with little dipper now and all the rest of the family that have gone to heaven. Oh gee I can see it now…….dad, roy, g-ma and g-pa, all on a couch with those 2 dogs…….wiggly….wiggly….wiggly.! with my love to you and mark. miss em.