Prior to moving my mom into an assisted living place the end of May, my mom had lived alone in a condo for over 20 years.  For most of those years, she lived independently and had kept up a place that had been the gathering place when my siblings visited from their distant states.  Mom’s condo was also where Mom and my siblings met my future husband, Mark.  And it was where my mom’s friends had come to visit.  To  my mom, her condo was her home.

Several weeks ago, when I told Mom that we’d gotten and accepted an offer on her condominium, I took her to her condo one more time.  I had left all the drapes and curtains opened so potential buyers could see the nifty view out the back.  The shot above is out her living room window.  The one, below, through the basement sliding door. 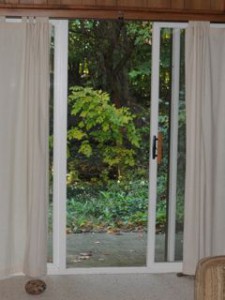 Mom’s response to seeing the house like that was to shut the curtains “so nobody can see inside.”  What she’d feared the most living alone was somebody peaking in at her.  So shutting the drapes in every room before she left was apropos.

As she walked back up the basement stairs she turned off the lights behind her, making the place all the more cave-like.  She stopped at the main level for one more look around, pausing at the fireplace to reflect upon how her neighbor had cut the tiles for her and how she and I had installed the tiles together.  “Yup,” I said, hugging her, “and I think we did a nice job.” 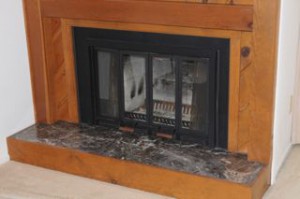 As Mom walked past the dining room, she paused and asked what my plan was for the rest of her furniture.  I told her a man was coming to buy her buffet, dining room table and chairs the next day.  With that, she opened a random cupboard in the kitchen, made sure the pantry was empty and took one last peak into the one-car garage.  She shut and locked the garage door and said she was ready to go.  It was oddly unemotional, and I wasn’t quite sure what to think.

The next day I met a man at Mom’s condo who bought up all of her furniture except her monstrous sofa-bed.  I didn’t have the heart to tell Mom that due to health concerns, nobody would take her sofa-bed in the basement and that I’d have to get rid of it myself.  I charmed the furniture buyer and his friend and Mark and we all worked together to carry the beastly sofa to my car.  Twenty minutes later, we paid $15 at the transfer station and dropped off the sofa for good. 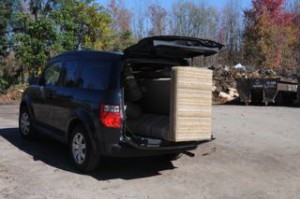 The last item to find a home for was her old fashioned dollhouse.  Mom had bought a kit many years ago and spent countless hours putting it together, adding a roof, fencing, all sorts of stuff.  On the inside, she’d decorated rooms, and she’d bought furniture and miscellaneous pieces over the course of many years.  Her request to me was that I try to get some money for it.  Mark and I loaded it into my car in the hopes I’d figure out an easy way to make Mom some money. 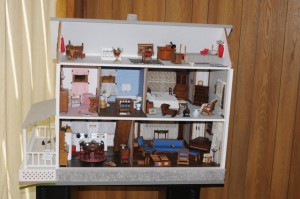 With the dollhouse in my car, Mark and I had only a final sweep through the condo to make sure we hadn’t missed anything.  We opened every cupboard, every drawer, and throughout the house we found all sorts of things I’d overlooked before:  an old towel and luffa in the bathroom, a glass pitcher in one cupboard, and an entire cupboard we’d missed on previous sweeps that contained a bunch of very stale crackers and cookies.  How’d I missed those?  I also loaded up the last of the cleaning supplies, the last waste basket, a few rolls of paper towels, three brooms and a toilet bowl brush.  And then I locked the door for the last time, wondering all the while what the new owner would find that I left behind.

Matk and I stopped at GoodWill to donate the items that were donate-able, then went to Kelly’s Consignment in Okemos where we learned we can bring the dollhouse to consign in early November.  We unloaded that into my garage temporarily, put the crackers and cookies and toilet brush in the trash.  And with that, the job of moving mom’s stuff was done.

The next day I went to the closing and signed on the dotted line.  Afterwards, I squared away the water bill and energy bill, and cancelled Mom’s house insurance .  Oddly, as I drove to work  I felt rather empty.  In several strokes of the pen I had made disappear the central gathering place for my brother and sister visits.  In the same few strokes, I’d gotten rid of all my obligations related to Mom’s home–no more wondering what might be happening inside her empty condo, no more running off to sign papers for the title people or the realtors, no more calls to the maintenance people about the need to fix this or that on the outside.  And no more stuff to sort, store or get rid of.

Mixed with the sense of relief, though, was a type of guilty feeling for having free time on my hands. In fact, when I took last Friday off to go fishing with Holly–who moved to New York on Monday–it took me until the moment captured below to relax and really start enjoying myself. 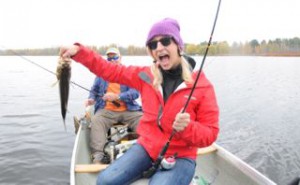 To make sure I continued getting used to having fun in my new spare time, Mark and I went fishing on Sunday, too.  Afterwards, I took Mom to the grocery to get some “necessities.”  And that was a good thing, because I was starting to miss her.