Sometimes it’s not only who you know, it’s who other people know.  In my case, I know my boss and she knows her mom and her mom is a member of the Book Club of Grosse Ile.  And it was because of that set of connections that I was invited to present a one-hour summary of my book to the members of the book club.  Immediately, I was glad I dressed in a pant suit.

Inside, we were guided to the meeting room by a man who told us to tell someone else where an extension cord was for our media needs.  The room was set up like this.  My first thought:  “I better not spill anything!”

Within a few minutes, I was introduced to Katie Hartwell, one of the book club members and the person who’d been my primary contact over the last couple of months. Then a waitress walked in to offer me some iced tea or lemonade and I told her I’d brought a bottle of water and was all set.  Another person came in with two long, entangled extension cords.  While Mark and I set up, ladies started signing in and putting on name tags.

By 1:00 the room held about 35 women, all of whom had given up an hour of their time away from a perfectly blue sky, zero-wind, 75-degree day to listen to me blab on about…  I was about to be introduced when one lady pulled me aside and asked me what it was I was going to tell them.  “I’m going to talk about my book, which is about raising a whole bunch of pets my husband kept bringing home.” “Oh,” she said.  “I had a dog once, but I can’t have a dog where I am.”  “Well, I said, have you ever considered getting a hamster?”  She thought that was quite funny, and as she told her friend and they both laughed, I wondered if perhaps introducing these ladies to the messy world of my messy animals wasn’t my best idea.

At 1:00, Katie introduced me and I started off by thanking them for allowing me to talk in spite of the fact that my boss’ mom, Pat, wasn’t able to be in attendance due to her rehabilitation from a fall.  Then I began my presentation, by t started talking, by giving them two reasons why–per the topic of my talk–Why There Will Always Be Something Underfoot in My House.  Reason 1 was that I married a guy with 4 kids and kids like pets, so I figured I’d have a pet or two.  I also introduced my first book, From Zero to Four Kids in Thirty Seconds.  And I showed them the nifty book cover that I designed like my wedding cake such that the bride’s fishing pole was connected to a larger fish than the groom’s fishing pole.  I think they liked that. 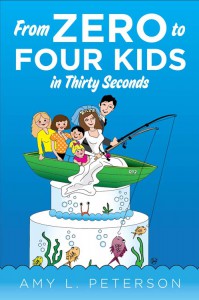 The second reason I provided for the fact that there will always be something furry underfoot in my house is the fact that Mark had a PhD. in biology and loved critters.  And from there, I introduced each pet wed raised over about 18 years, going chapter by chapter, showing photos of my book and reading two sections. 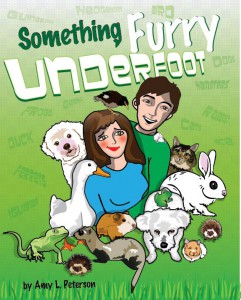 An hour later, I reached my last slides, showing that because of Mark, and as evidenced by Winston, Snickers and Preto, creatures are still coming into my house.

As I began packing up my media and re-tangling the two giant, orange extension cords, I looked up to see a woman asking if I’d brought copies of my book.  Over the next 15 minutes, I sold 5 copies, with, which a $100 honorarium was the best way in the world to wrap up my book promotion.  Best of all were the comments:

“You’re a regular comedian,” one said.

“That was a great way to start our season,” one said.

“I enjoyed it very much.  And I think you’re a saint,” said another.

“I think that it helps that he’s handsome,” said another woman, who caught on to the fact that most of the critters that came into the house were Mark’s fault.

Another woman said, “I was so glad you didn’t show any photos of any snakes or other scary thing.”

Another said she was on her way to see my boss’ mother, recovering from an accident, and that, “I will report favorably.”

As I was chatting, one kindly woman got me a plate of fruit and nifty chocolates that might have been petit fours. I sat down to chat with a few of the women, conscious the entire time of the whiteness of the table and the slipperiness of the melon pieces I attempted to cut with a knife.  I cut and nibbled carefully as one of the women told of her dogs and cats, another about how her son had ferrets once upon a time, another about other pets.  It seemed they all had had at as least one pet or another, and they were all happy to share.

It was about 2:20 when I thanked them, took the last of my unsold books, and found Mark outside waiting for me on a bench.  Nearby was a member of the book club sitting on one of those walkers with a seat, waiting for a ride.   She was telling Mark how funny I was, and I thanked her for taking time of out of such a beautiful day to come hear me talk.  As Mark and I walked back to the car, she said something about how it was nice to have met the handsome hero of my books. “Too funny,” I whispered to Mark.  “One of the other ladies said I was the hero.”

Mark and I drove the two-hour drive home and after tending to critters, Mark poured two glasses of champagne.