Until this weekend, our two pups, Winston and Snickers, were just as happy playing inside the house as outside.

But with six inches of snow on the ground, the puppies preferred to be outside.  They ran around the front yard, then we took them to the back yard.

Afterwards, inside the house, the pups  became rather pitiful looking as the little wads of snow slowly melted.

But after the pups were dried off and they had a wee nap, they were back outside to romp around in the snow again. 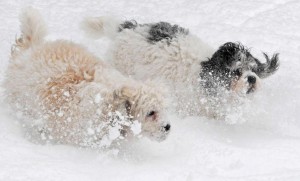 This afternoon I was wondering:  if I didn’t have to shovel the driveway to get my car out, shovel the deck so the birds and squirrels can find the sunflower seeds easier, and shovel a circle in the backyard so that the ducks can find the corn we put out for them, would I see the snow as merely something fun to play in?  Like a pup or kid?  So, I put on my boots and joined the pups outside, and as I ran around in circles chased by smiling fur, I felt a renewed love for the white, fluffy stuff that is after all, a part of a Michigan winter.   So thanks, pups, for reminding me how much fun the snow can be.  Next time:  snow angels!