When Mark wasn’t raising discus fish and hamsters this summer he spent some of his spare time watching fishing shows on TV.  One show featured a fishing fanatic and guide named Doug Samsal who was filmed in a boat on a northern Michigan River catching salmon with spawn and bobbers which he flung overboard and watched float down the river.   This technique for catching salmon was new to Mark, so he hired Doug to take us down the Manistee River to catch salmon last Wednesday.

Unfortunately, the Manistee River is 3 hours from Lansing, which meant I had to take Tuesday afternoon off to drive “up north.”   I was missing work terribly as I drove, watching nifty clouds forming and breaking and leaving the mid-Michigan traffic behind.  Before reaching the town of Manistee, we wound our way to the nearby fish weir to make sure salmon were really hanging out in the Manistee River.

After being convinced there were fish in the river, we had a relaxing dinner free of any animals whining for nibbles, and drifted off to sleep in a motel room without two dogs wiggling around our bed.  Truly, a sad story so far, huh?

Overnight, Manistee received two inches of rain and the weather cooled off to a comfortable 60 degrees by morning.  We rose at 5:15, nibbled on a continental breakfast courtesy of the Microtel Inn & Suites and drove off into the dark of morning.  As we pulled into the parking lot at the boat launch fifteen minutes later, we heard a giant splash in the river, which could only mean salmon.  Soon our guide, Doug, arrived, lowered his barge-like boat into the water, grabbed a few rods and let us jump aboard.

Doug motored upstream for a bit before dropping anchor and handing us spinning reels on long rods with lures attached to the ends.  He explained that he would move the boat to the various bends and holes in the river and all we had to do was cast our lures–Thundersticks made by Storm–into the water.

Cast?  What happened to plopping spawn bags overboard and watching bobbers bob around, Mark asked?  Doug said it was too early in the season to use spawn bags because guess what?  The fish hadn’t spawned yet.  In fact, I noticed there were only a couple of other people on the river, two of whom Doug described as die-hard elderly fishing fanatics and one of whom Doug described as a guide with lesser abilities than his own.  I feared it was going to be a long day.

It turns out Doug is passionate about teaching people fishing techniques and he saw by my ten-foot cast and sigh of exasperation, and by Mark’s lure only going about fifteen feet before getting tangled on itself, that he had two people that needed a lesson on using spin casting gear.  As a bald eagle swooped across the misty water made pink by the slowly rising sun, we were shown how to hold the rod, how to fling the lure after holding the rod near our ear, and how to flip the bail to stop the line from going into the nearby shrubbery.  Doug’s method worked.  Most of the time anyway.

We also discovered how to snag our lures on the oodles of fallen trees in the Manistee River, and quickly learned from Doug how to get a snagged lure off a log, which is a handy skill to have indeed.  With our new skills in hand, and less than an hour into our river flogging day, we were into the rhythm of rods and spin casting reels we still disliked greatly when Mark got a fish on his line.  It was a smart fish because it ran off some line and then wrapped itself around a tree that had fallen in the water.  No problem, said Doug.  He took this long pole with a curlique on the end, found the line in the water and worked it off the tree it was tangled on. 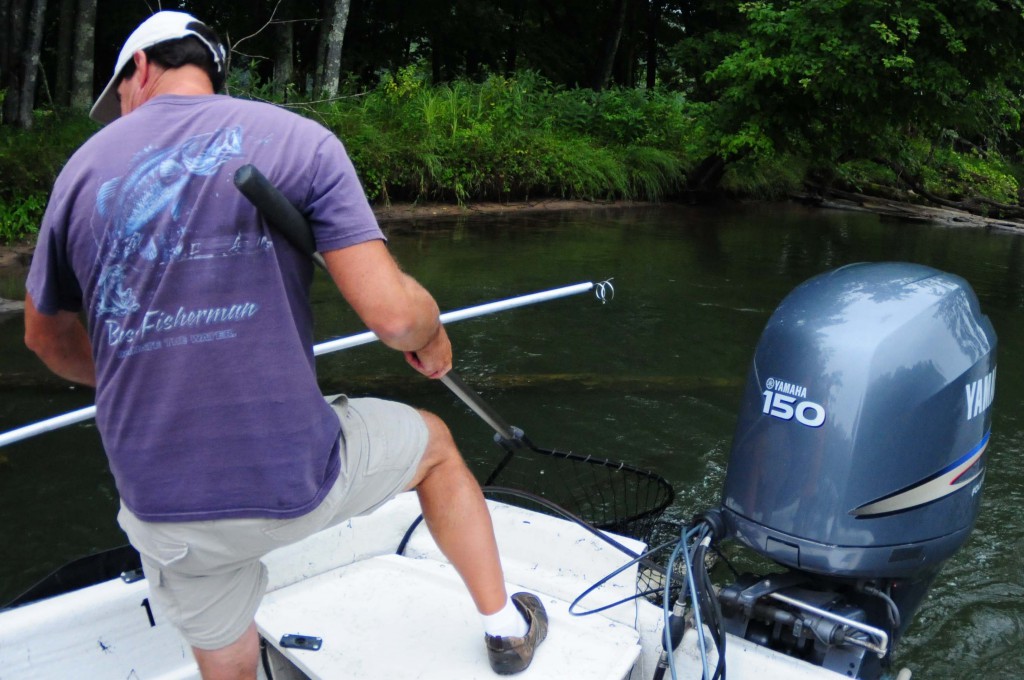 With the line free, Mark reeled his first fish to the boat and Doug netted the fish.  Mark’s fish was  not a behemoth by any means, but it was a nice fish.  And Mark was suddenly one fish up on me.

Mark released his fish and an hour or so later, he had his second fish on the line.  As with his first fish, Mark’s second fish took him for a spin around a log.  Doug stepped up with the line finder thingy only to discover that this time, the line was so entangled, there was no way to unwind it from the submerged log.

“No problem,” said Doug.  “When I think the fish is going to sit still for a moment, I’m going to cut the line.  You reel in the tangled up line from the tree as fast as you ca, hand me the end and I’ll re-tie the line.”

But before we could say anything, Doug stood on the bow of the boat, held the line with his left hand, snipped it with his right.  Mark reeled in the formerly tree-tangled line, handed Doug the end and we watched Doug tie the ends together.  Doug let go of the line, Mark reeled again, fought the fish a few minutes longer and soon had another fish in the boat.

I’ve never seen anyone re-tie a line to get out of a snag and still bring the fish on the boat.  I was impressed with our guide.  I was not very happy with Mark, though, because he was two fish up on me.  Luckily, his second fish was a much smaller fish, which I called a guppy.

As the morning wore on, I had a few smacks at my lure, got tangled on a few logs in the water, pulled up lots of old fishing line, had to have Doug help me get my lure off a couple of logs, and watched several fish blow out of the water after hitting my lure but not biting.   We had fish jumping out of the water all morning long, which was fun to see, but frustrating because I couldn’t catch one.

It was going on 11:30 when we floated back to the boat launch and Doug stopped to get his bait casting reels for us to use.  It was shortly afterwards that line finally went buzzing off  my reel.  On the end of the line: a small pike.  A half hour later, I got all excited again.  I reeled in another small pike.   The score was 2 to 2 fish overall but Mark said my pike didn’t count because we had come salmon fishing.  He said the real score was 2 to nothing.

I was contemplating ways to throw Mark overboard when I finally felt a heavy tug on my line followed by intense pulsing of line being yanked from my bait casting reel.  I had 15-pound monofilament line to work with, Doug said, so I had to play the fish carefully.  This of course, made me nervous, because after flogging the water since 6:30 that morning, I wasn’t about to go home fishless.  My fish ran down river, dove under a log, bent my rod, made me reel quickly and tugged so hard I was unable at times to reel at all sometimes.  Doug moved the boat perfectly to keep me paced with the fish, and when it came to netting, Doug nabbed my fish and brought it into the boat.  My fish looked something like this.

I released my fish and we flogged the water for another hour.  The sun came out, the fish stopped hitting, and by 2:30 our arms were about to fall off.  Doug cranked up the boat and when it stalled out, discovered that the line connecting boat to gasoline had fallen off and the clip was broken.  I spent my ride back upstream to the boat launch holding onto the gas line.

And of course I was smiling.  Because at the end of the day, it’s doesn’t matter that my salmon was bigger than both of Mark’s fish put together, or that I caught two species of fish to his one, or that I caught more fish than Mark.  All that was the icing on the cake of a perfect day on a Michigan river.

So cool Amy! Kailea will be jealous!!

I love the typical dad comment, “but Mark said my pike didn’t count because we had come salmon fishing”, way to blow him out of the water!!! Yeah!

I just did some research using my new “Fish of Michigan” book and the interweb, and found that you caught a Chinhook Salmon!

loved this…. I wanna go fishing too.