In the spring of 2009, my mother and I drove down memory lane, which is a stupid term considering we drove up and down numerous streets or lanes.  But let’s not get distracted.  The small town in question is the southeastern Michigan town of Sturgis, and it is there that we  drove past Mom’s childhood home, my grandfather Peterson’s home, and the cemetery where all four of my grandparents are buried.  With Mom’s memory lanes all photographed and reflected upon, I stopped at a gas station, then a restaurant, then a brick municipal building to ask if anyone knew where Peterson Circle is.  It’s the street named after my grandfather, the famous Alden William Peterson?  The guy that worked for the city in the late 70s and early 80s to entice more industries into the city?  Nobody had heard of it.

I went home frustrated that I couldn’t find the road named after my grandfather, and that nobody had heard of him.

In November of this year, my Uncle Roy passed away after a brief battle with cancer.  He had lived in Sturgis, and his passing brought together family members I hadn’t seen in a while, including my brother, Lloyd, from New Jersey.  After the funeral, I expressed frustration at not having found Peterson Circle in the spring, and Lloyd said he’d like to see it, too.  My father said he felt sorry for us and offered to drive us.  His wife, Norma, offered to take a photo.

As we drove past the airport and turned left into a small industrial area, I realized I had been within a half mile of Peterson Circle in the spring.  I was bemoaning that fact when my father stopped in front of the sign and parked the car.

The thing is, he could have parked anywhere, because there was no traffic, and when I looked down the length of the road I saw one car parked at one of two businesses.  I mumbled to Lloyd about the road being a circle ending in a cornfield, and he said our grandfather—while quite honored that the city had named a road after him–was once heard to say:  “It figures.  They name a road after me and it doesn’t go anywhere.”

Still, I couldn’t help but smile as I stood proudly in front of the sign. 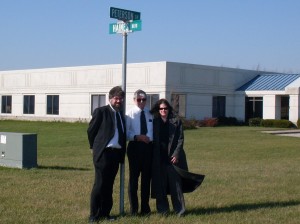 Afterward Norma snapped that photo, I happened to look up to see that we were at the corner of Peterson and Haines.  Haines is close enough to Hanes, I said, and with the immediate cooperation of my father, and only slight resistance by my brother, Norma took this second photo. 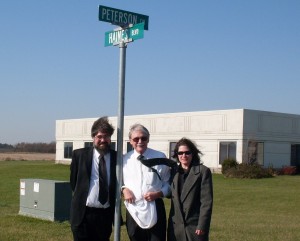 So here’s to my Grandfather Peterson, the hard working guy who had a sign named after him.  We don’t care that the road ends in a cornfield, didn’t have any businesses on it until fairly recently, and that it circles back to itself.  We’re proud of you.

And we’re glad you passed on to us a good work ethic . . . and a great sense of humor.