According to Mapquest, it’s possible to get from Orange City to Crystal River in about two hours.  Thus far, though, it’d taken much longer to get anywhere in Florida, and the more I’d been in a hurry, the more frustrating the traffic.  To outsmart the traffic gods, I announce I’m in no hurry to get to Crystal River and mention that perhaps we could stop at a wildlife area should we pass one en route?  Mark agrees.

We follow the GPS to Crystal River and near DeLeon Springs stumble upon the Lake Woodruff National Wildlife Refuge.  With no prior information and no idea what to expect, we expect even less when we find the information station is closed to save money.  We follow signs past a few homes and a nursery, and end up at the parking area which has exactly one car in it.  There’s a pit toilet, which we use before heading out between some large, drapey trees to a large expanse of open wetland lined with berms and surrounded with rectangular cuts holding water.  We hear from the left the rumble of what sounds like someone trying to start up a car and having a hard time of it.  Mark says it’s a gator growling and I suggest perhaps we walk in the opposite direction. We see a look-out tower way, way in the distance and make that our target. As we walk  along the berm, we see a small gator—maybe 4 feet long—and not much else, really, for ten minutes or so, until we get to Woodruff Lake.  There, an airboat is making a heck of a ruckus as it cruises the shoreline.  As the airboat disappears into the lakeshore somewhere, a man approaches carrying a small tackle box, fishing pole and reel, the latter of which he says is broken.  We wonder where exactly he stood to get a good cast, because only one narrow notch reaches Hoffman Lake and he’d have to be a good shot to thread a lure through it.

It’s getting warmer as we walk, and I’m disappointed that we’re not seeing more birds, because I don’t have a rod in my hand and can actually take a good photo.  We do see several moorhens, also called the common gallinule or marsh hen.   It’s the same size as a purple gallinule but its body is all black and it has yellow legs and a red beak with a dash of yellow on the very tip.  We see several paddling about the narrow cuts on either side of the berm and one cooperates for a photo.

Mark sees bubbles in the water by the overlook and we wait to see if a gator emerges.  When nothing else happens, we stop for a photo of another kind of cormorant before climbing the stairs to the overlook to gaze out at what is 22,000 total acres making up the wildlife refuge.

As we take in the vastness of the refuge, two sandhill cranes fly over.  We see a couple of egrets way, way far away.  And we debate how far away far is as we climb down the stairs and begin our walk back.

The sun has risen overhead and I’m getting toasty.  We round the first corner of the berm and find a small painted turtle in the middle of the berm with a sombrero shaped shell, sticking up on the edges like it was designed to catch water…it seems like a bad design to us.  Mark removes the leech that had attached itself to the shell and throws it in the grass.  As I carry the turtle to the other side of the trail and put it back on the ground in some taller grasses, I tell it to watch out for vultures and other birds.

About 2/3 of the way back we pass a couple in their 70s with walking sticks and water bottles, straw hats and smiles on their faces.  Across the marsh a bald eagle flies toward where the giant gator had bellowed.  Down the berm toward the car are two vultures, one of which flies off with an approaching runner; the other stays where it had landed, right in the middle of the mowed part of the berm.  It stands its ground while the runner—a young man about 6 feet in height—alters his path from the middle of the mowed grass to the edge of the berm to get around the vulture.  The sideways glance he gave the vulture was pretty fun to see.

Mark and I approach the big black bird and step to the side, too, only we chat with the  vulture with, “Hey buddy,” and “Looks like you own this path, huh?”   After we pass, the vulture takes a hop-step as if jumping in triumph over the humans.

Back near the parking lot in the first bit of open water is a great blue heron.  I say hello to it so it doesn’t feel I’m partial to vultures, and ask it not to eat the small turtle with the funky shell.  Mark and I return to the parking lot and I pick up a fake, rubber lizard someone had used to entice a fish, and place it in the wastebasket so no hapless critter picks it up. We return to the truck’s air conditioned comfort and mosey our way down the road.

The rest of the trip to Crystal River is uneventful and ends in getting stuck in traffic due to an accident.  The town has much more traffic than it did when we’d last been there some 23 years prior.  The Best Western—which I believe was formerly the Crystal River Lodge and dive shop and where I stayed in the 1980s—is still there, but the dive shop has been replaced by a restaurant.  The town has changed so much, we need a GPS to guide us to the Port Motel and Marina right on Crystal River.   The Motel is a two story cinder block and in need of paint and modernizing, but the perfect spot for us because it’s right on the water. And it’s small.

We check in, unload our stuff into THE very room we had seen many years back and always wanted to rent: the bottom corner.  The idea 23 years ago had been to take kayaks with us so we could paddle any time we wanted.  But the idea of putting kayaks on the roof of the truck and driving them across country didn’t appeal to us so much, so our new plans included renting a kayak.

It would come to pass that those were not the best of plans.

Our room is small and everything is old and in need of improvement.  The bathroom tile is a hideous shade of blue that needs fresh caulk. There are one-inch holes in the floor that I could let myself imagine a snake creeping into if I allowed my imagination to run even a little bit wild.  My first flush of the toilet results in the chain falling into the tank and having to reattach it.  The faucet sink is so close to the back of the sink there’s barely enough room to wash my hands. The bed is on a frame made out of wood or plastic which I stub my little toe on within the first 10 minutes of our arrival.  The furniture is likely from the early 1980s.  But the shower is hot and the force enough to blast the road grunge off me.  It’s perfect.

I step outside onto the grass and walk to the seawall at the water’s edge.  There, I reflect on how I’d gotten scuba certified in Kings Spring– which is right across from our room–in the mid 1980s with the MSU Snorkel and  Scuba Club.  I returned with my collegiate pals the following year for advanced training, which included rescue diver training in a spring which had been stained by floodwater from the Suwanee River.  (Indeed, we all should have flunked because we never did find the dive master sitting in the marked up water).  In 1994, I’d brought Mark here with Willi (a.k.a. kid number 1) on our first trip together.  Mark and I returned in 1996 after we got married, with all four kids, each of whom got to have interactions with manatees.  A lot had changed since then though:  more cars, more people, more boats. 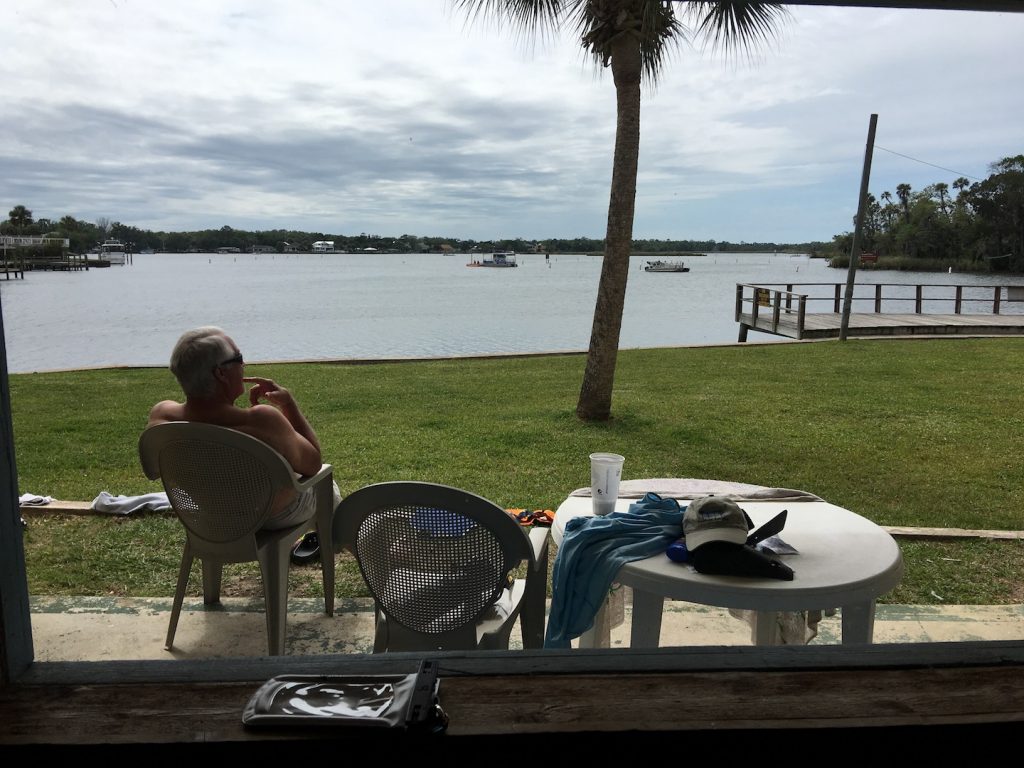 I have mixed feelings about being here, and I continue to mull things over as we walk to the dive shop next door—adjacent to other rooms with less desirable views than ours.  A young Captain Mike owns the dive shop and has a steady stream of people signing up for the next day’s manatee tours.  We tell him we’ll be back in the morning to rent a kayak, as I cannot bring myself to ever ride again in a propellered boat in Crystal River.

As we get ready for dinner, I peek out and see a little blue heron.  It’s a resident of Florida and I hadn’t seen one since we were in Brazil a few years ago.

This one intrigued me because it didn’t mind me stepping outside to take its photo.  And it did some head twisting I hadn’t seen before.

Shortly after the heron took to the air, this sandpiper went strutting by.

As I poke around looking for lizards, I see this aquatic insect in the concrete wall separating the motel property from a private property.  Like most normal people, I take a photo, then shoo it into the crack so neither of my bird pals eat it.

We eat dinner at the restaurant adjacent to the motel, the Margarita Breeze.

I have a salad and a bowl of black bean soup, along with a beer that’s super cold.  The breeze is pleasant, the view decent, but we are tired, and we’re not used to having dinner with people, music blaring in our ears, or having lots of people around.  We cash out, mosey down to our room, and set the alarm so we get to Captain Mike’s as soon as it’s open in the morning.