We spend our first day in Florida getting acclimated to sunshine and warm air by touring three nearby springs.  After a simple hotel breakfast of conveniently round eggs and round sausage on round muffins, we head to our truck and see this bird.  It’s a mockingbird, and while known to sing up to 14 songs, it offers us not a single note before flying away.

Blue Spring is the closest spring to our motel, and the parking lot is nearly empty first thing in the morning.  It’s in the low 70s and we smirk to ourselves as we begin walking in the sun, thinking about those poor souls in Michigan.  We find several manatees sleeping in a protected area, which is roped off and well marked to make it clear nobody can swim or paddle in the area or in the creek.  Four rowdy kayakers are hanging onto the buoys and so excited about seeing a mother and calf manatee in the spring that one about falls out of their kayak.

Nearby, we see several black vultures on the ground, including one that refuses to move as we approach.  It would not be the last time we have a close encounter with one of these big birds. 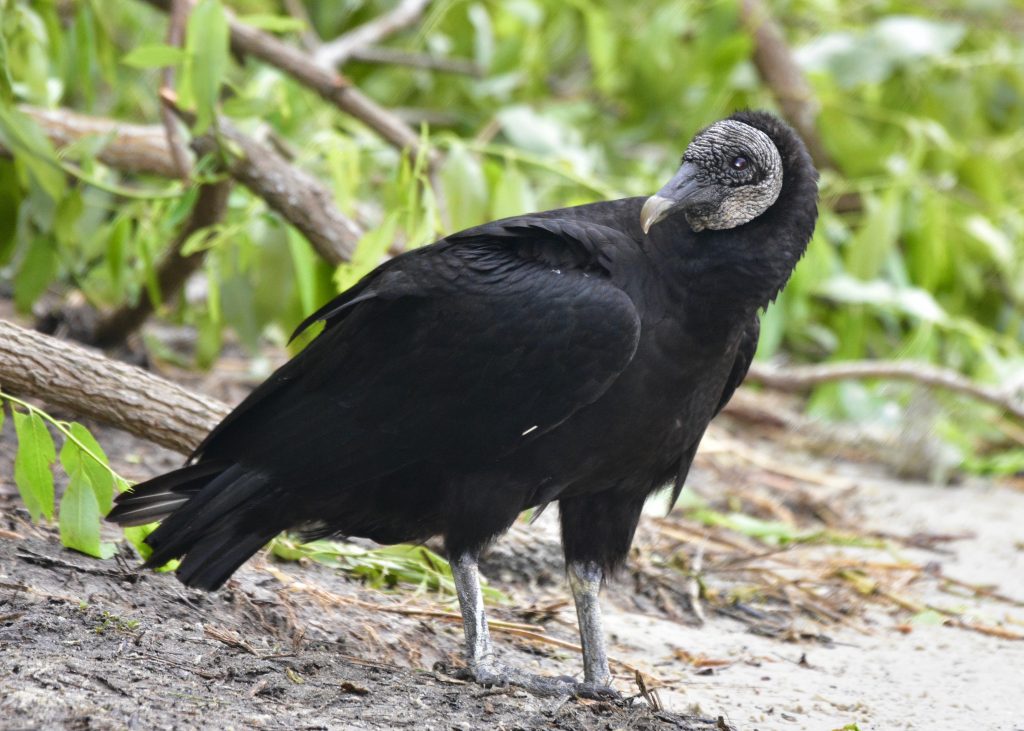 We walk up-river and see a line-up of gar in the water, several inches apart, barely moving, as if prepared for an attack.

In the middle of the river on a dead tree is this fella.

As we walk along the boardwalk, I spot a kingfisher through the trees, diving down into the water and coming out with something in its mouth.  Zooming in reveals a crawfish had met its fate.

Nearby, we find a gray squirrel rooting around for nuts on the ground.  Mark said it looked like a perfect taxidermy specimen. 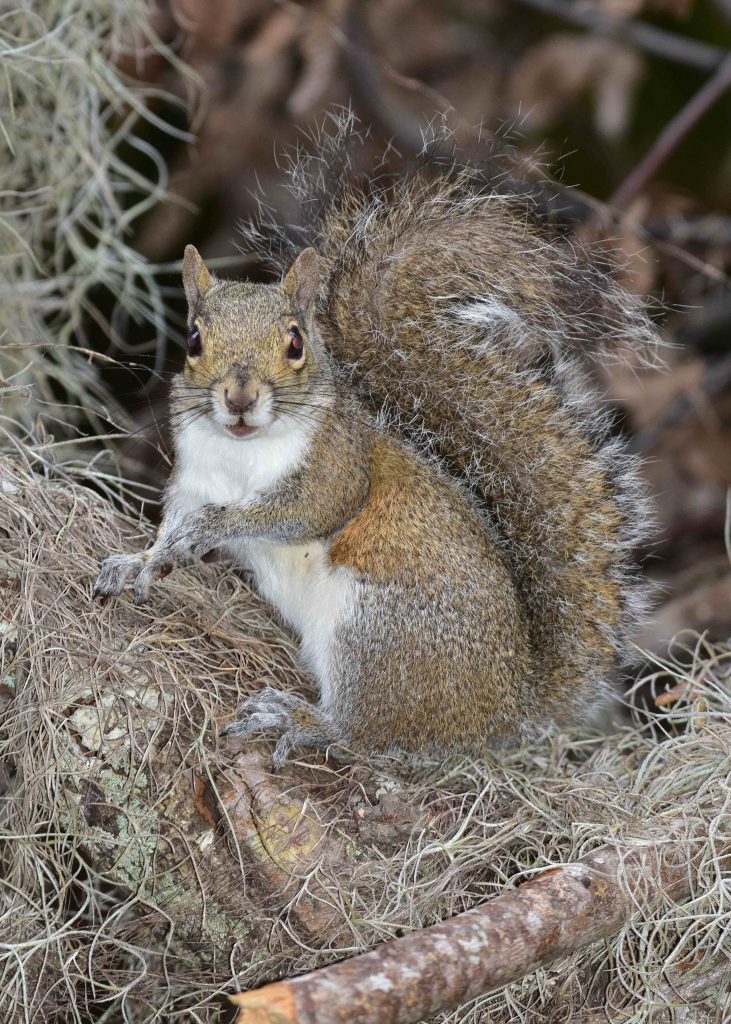 We walk up river until we reach a gift store that has nothing interesting on the inside, but on the outside is an elderly couple with a small stroller, which, we discover contains a lhasa apsa. We ask the couple about the dog and they say it’s 16 and “We never thought it would live this long. But he’s our buddy so he goes everywhere with us.” Super cute.

We head back to the car and head to Gemini Springs, which has a big parking lot and a lack of signs telling us not to feed wildlife. We always travel with peanuts just for such occasions and, in this case, we have the honey roasted variety. A casual stroll with a bag of peanuts and the very motion of imitating food being thrown leads to one squirrel approaching for a peanut, which, in a matter of minutes, results in a total of 15 gray squirrels at Mark’s feet taking peanuts.

When the nuts are nearly depleted, we walk across a wide, open grassy expanse to some ponds.  We don’t get very far before we run into this fella.

As we near a pond, we see a 4-foot gator.  We watch him glide across the water and work his way up to a log to catch some rays.

Check out the webbing. And the need for a pedicure.

We walk on toward a large pond and look down from the observation platform to see tilapia hovering over round depressions which are their beds. They tilapia are bluish with large scales like carp. Two are face-to-face a few inches apart, and suddenly, both dash forward and touch open mouths, perhaps in a gesture to protect their beds.

Nearby is this bird, which did not seem too worried about us tromping by within 10 feet.

Nearby we find a large fishing pier over a seemingly endless wetland where five people are fishing.  Below, in the weeds, are several female boat-tailed grackles eating larvae…

…while the male boat-tailed grackles loiter on the railing waiting for the peanuts Mark throws their way.

As we start walking back to the car I hear the rustling of leaves above me and look up to see a hawk I haven’t seen before–buff colored on the top, with rusty colored stripes on its chest.  I take several photos, and upon zooming in on my photos, realize he has a squinty, goopy right eye, which, for a hunter, would surely make it hard to catch prey. It’s my first photo of a red-shouldered hawk .  I wish him a speedy recovery.

It’s gotten a little warmer—maybe the mid 70s—and we’re heading to the truck when I hear a bird call I’ve never heard before. I wait for a couple of minutes until this bird appears for a moment before flitting off.

We head to Wikewa Springs musing at the fact that we need air conditioning to cool off.  This park consists of a big, bowl-shaped spring perfect for shallow swimming, and a pond connected to a lake where several dozen Japanese students are frothing up the water while trying to kayak, some, it appears, for the first time.

We follow a boardwalk for several minutes and notice that oncoming people are primarily chatting and not really looking around. We see several types of lizards and this bird, which I think is a ruby kinglet. 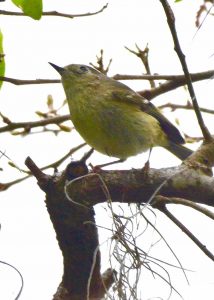 Nearby, I see a smaller red-shouldered hawk than the one we’d seen earlier, perhaps five feet above us and only 15 feet away. I don’t have to use much of a zoom to get a photograph of it looking to its left, intent on watching a lizard. It pounces on its prey and disappears behind a tree.

We wrap up our walk and drive back toward the hotel in search of dinner. Afterwards, I call Bob Stonewater and we agree to meet at a 7-11 store at 7:00 in the next morning.

And with that call, Bob Stonewater was unknowingly on the eve of the three most challenging fishing days he’ll likely have all year.