I’m awake at 5:20 thanks to Mark getting up, turning on lights, and announcing it’s time to get up.  We get our Coke/coffee fix in the main cabin before 6 a.m. and are ready to fish by 6:30. It’s cloudy but no rain (yay!), giving my rain coat—a Marmot Precip that is still soggy—time to dry out in the boat.

We head toward what will be the area of our new camp, because camp is moving while we fish.  In which direction, I haven’t a clue–it could be north, south, east or west, I’m thinkin.  Wherever it is we go, it’s slow fishing for a while.  We catch a few fishand at a spot Sappo seems to know has a big fish, I cast a dozen times, before WHAM! I hook a 12-pounder.

After a good morning flogging the water, we head across the river to join John, Curt and their guide in the shade to have lunch. We chat about dolphins, dinosaurs, all sorts of things. Curt says he’s really busy the rest of the spring and summer but that we should all get together sometime. He’s such a sweet guy.

After lunch we get two doubles, which is when both Mark and I are fighting fish at the same time.  Later, we ask Sappo to pose with a fish.  He takes off his hat just for the photo.

As the afternoon gets warmer, the fishing becomes hit or miss–mostly miss.  At one opening into a small bay, Mark loses a big fish that smartly rubs him off on the only log in the area. He’s grumped the rest of the day. Later, in another lagoon, Mark has a kingfisher go after his Yozuri lure several times. So he’s real careful as he fishes and eventually switches lures.  This particular kingfisher is a real character, hanging out with us and moving to different trees when Mark casts in a different direction to avoid catching the silly bird.

Sappo takes us to several shallow areas that don’t hold many fish, but eventually finds two “honey holes, “one with small fish, one containing a 9, 8 and 7-pounder. Lures are white Yozuris with pink or green and a pink top, white bottom, black-spotted top water bait.

We see dolphins throughout the day and one goes after one of Mark’s fish in the fastest flash of boiling water smeared with pink I’ve ever seen. We also see a four-foot caiman and a five-foot caiman.

We’ve netted 45 fish by 4:00 and we head back to camp. It’s an hour boat road, and I realize as we buzz along that when the weather is tropically perfect like this, I could ride in a boat all day.

The cabins at our new camp are tied to shore and all but a little of each cabin is sitting right in the water. 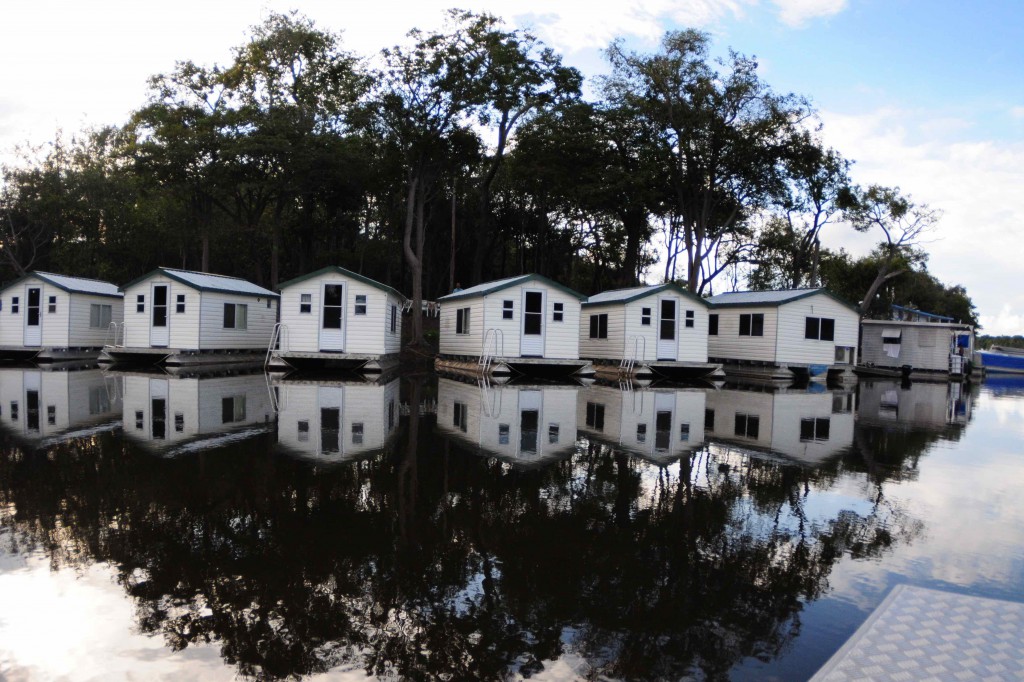 On the Itapara River in 2013, our cabins were pulled onto sandbars and only the back 1/4 of the cabin–if that—was in the water. With most of the cabin in the water, every step one’s partner takes makes the cabin wiggle. Something as simple as going to the bathroom is made all the more interesting with someone else walking around inside the cabin. To add to the interesting setting, our cabin has a few cockroach friends—1 inch, ¼-thick brown fellas that have travelled with us from one camp to the other. They hang out below the rubbery grate on the bathroom floor most of the time. However, at night, they sometimes run around on top of the grate, making it such that I have to stomp my foot at them so they leave me alone.   What fun! 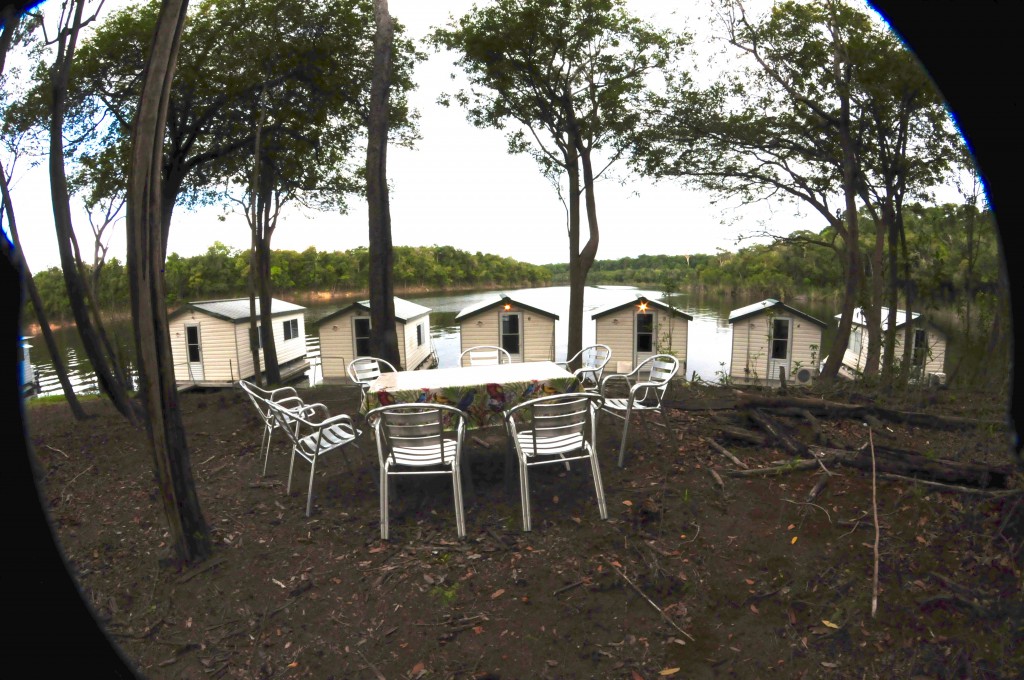 Alejandro and workers have cleared a path from one cabin to the next; they have also cleared an area on a small rise and set up a plastic table and chairs. After I shower, I join Bobby and others on the rise and take a beer out of the small cooler Fabiano has filled for us. Bobby offers me use of his satellite phone to check on the dogs and I decline after expressing my gratitude, saying that a real vacation is not worrying about the dogs or my mom. Making a phone call home may make me worry about one or the other. As Dr. Bob said, “Sometimes ignorance is bliss.”

Alejandro joins us and I ask what happens to the waste at camp. He says all wastewater from each cabin goes into the pontoons underneath each cabin. Before the camp moves, each cabin is pumped of its waste and dumped on a spot on the ground. He says they have to do that. Paper is burned, including the toilet paper, which we have to put into a garbage can instead of flushing it down the toilet.  I tell him I’ll sleep better knowing my shower isn’t sucking up someone else’s poo water.

Before dinner is served, a man visiting from the nearby village takes one of the camp worker’s kids out for a spin in a native boat.  I 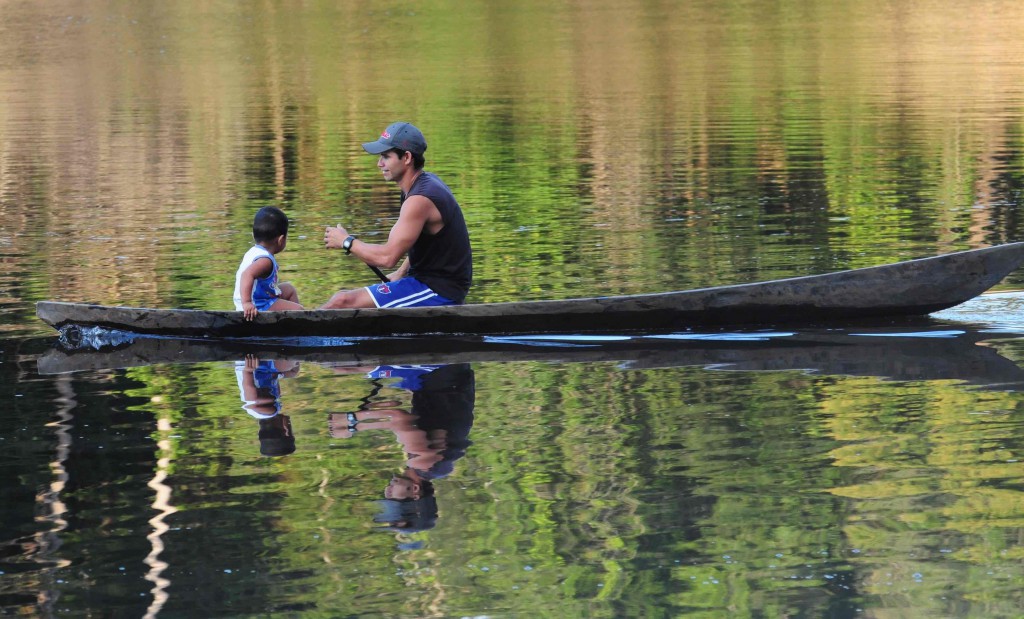 Dinner is chicken, peacock bass fish, rice and beans, a salad of cucumbers and purple cabbage, and a few potatoes mixed in with the chicken. Dessert is what the guys call “diesel ice cream,” which is made from a local fruit.  It sounds awful but is really not all that bad if your taste buds are as bad as mine.  I’m still amazed that we can get ice cream in the jungle.

The talk is of business, and at one point, Bobby says, “I hope you don’t me saying this, Amy, but women can be caddy and nasty and really stir up an office.” I admit that that’s the case and propose that this goes back to at least high school locker rooms, if not earlier. In a locker room, when two guys disagree they call each other names; often there’s a fight, somebody loses, and they move on because there’s a resolution one way or another. In a woman’s locker room if two women disagree, they speak unkind words to each other, and since there is no physical fight, there’s often no conclusion.  In some situations, we carry grudges like badges, and in the very worst, we share our situation over and over again to taint the rest of the work place.

After failing to defend women, we talk about fishing, the Flint drinking water issue, and high mercury in fish.  I ask our camp host, Alejandro about how a guide becomes a guide on the Amazon.  He says they often start as camp assistants like Fabiano, bringing in the meals, cleaning up afterwards, serving snacks, offer drinks, and in our case, makes sure Mark gets a cup of coffee after dinner.  Alejandro fishes every single day, and he takes Fabiano out with him to help him learn the ropes. The rest is up to him…sort of. The guides are almost always from the local village/Indian tribes and Alejandro has no bearing on who gets hired.  Alejandro also said that Brazilians pick up on new rivers and geography better than any other people he knew.

Mark asks if Alejandro knows Preto, our first guide, and he says no. Mark then asks if Alejandro knew Andre, the guy we befriended when we were stuck in a small village trying to get home in 2013. (The story in 2013:  the plane that was supposed to have taken us out of the jungle had  load of heavy americans and clipped a wing on some trees during take-off, knocking half the wing off.  Because the plane’s load was quite heavy and the waters low, it took 2 trips with a new plane to get the guys off the water. That same plane was then used to get us out of the village and back to Manaus…about six hours after our original departure time. During those six hours, we met Andre, who was mid-twenties, perhaps, and a chief negotiator with the Indian tribes to get access to local waters for us gringos.)

Alejandro frowned and said, “Yes, and I have some news about Andre. Terrible news.”

To which one of the guys said, “Bad news doesn’t get much worse than that.”

We learn that Andre had been shot 7 times after being lured into a place in downtown Manaus. He had River Plate Anglers brochures with him, but things didn’t go as expected. Mark and I wondered out loud if he was into something more than negotiating for River Plate. Alejandro said Andre had 4 boats, a marina, nice cars including a new Peugeot, a young wife, and he wanted to work a gold mine somewhere on the Amazon, which is illegal. Andre was about to start work on that, but Alejandro told him the police were onto him and he pulled out.  We concluded he was into some bad stuff and it had gone poorly for him.

Somewhere along the line Dr. Bob says that when he and Steve went by in their boat earlier in the day he saw me flogging the water like everyone else and that I’m quite the fisherman. He’s very sweet for saying so, especially since my hands are puffy and I can’t even make a fist.  Regardless of the kind words, he and Steve–and everyone else for that matter–are out-fishing me, and I’d just assume they all get befriended by piranhas.  Not really.

Mark and I are back to the cabin by 8:00 and I’m done writing in my journal by 8:30. It’s quiet except for the humming of the camp generator. I’m getting ready for bed, and have powder on my hands and am about to powder my butt when Curt walks in, says, “Hi, Ye’all” and turns around all embarrassed. As I clap my hands to get rid of the powder, Mark invites him in and tries to make him feel comfortable about the fact that he walked into the wrong cabin. He says, “it’s a good thing we weren’t “necked!” (To learn about naked and necked, see Day Four).