I awake with puffed up hands in the early morning, unable to make a fist.  It’s the same problem I had two years ago in the Amazon and I’m betting an aspirin–or several–will make it better.  After showering, I head with Mark to the breakfast cabin.  There, Bobby shows me the note I’d sent to him in 2013 with a clown colored Aile magnet lure I’d mailed him as a thank you for inviting us on the trip in 2013.  I am touched that he kept the note and lure in its box for three years. He’s such a sweet guy.

It rains on and off in the morning and I think I’m in a groove because I hardly notice when it’s raining and when it’s not.  I don’t even notice it’s raining when I see John and Curt wearing rain gear.

Seppo guides our boat off the main part of the river to a narrow inlet that doesn’t look real passable to me.  We’re wondering if Sappo knows where he’s going, because we end up stuck on a log, literally, and watch as Sappo jumps out of the back of the boat, walks up another log, looks over a ridge, decides his path into a lagoon isn’t the best bet, and turns us around.  It’s all part of exploring the jungle.

En route to a new spot, I spend way too much time trying to photograph these speedy little birds I think are a type of swift…if only because it flies so swiftly.

After getting dizzy photographing a moving bird in a moving boat, I see a large bird politely sitting on a log and waiting for us to buzz by in our boat.  It’s much easier to photograph.

In the early hours we also kick up a couple of cocoa herons.

Later, a swallow-tailed kite looks down at me from above.  Like most people, I wave.

I also take a few photos of a large bird I think is just a turkey vulture but which, upon closer inspection, turns out to be a yellow-headed vulture, a new bird for me.

Of course, we are on the river to go fishing, not birding, and we are fortunate to find several hot spots throughout the day and get a total of 48 fish including two 11-pounders.  Mark catches his 11-pounder in the rain.

I wait for the sun to shine to catch my 11-pounder.

Mark gets a 13 pounder in the final half hour, beating his Itapara best by one pound.  His biggest now is one pound bigger than mine.  Gr.  This turns out to be one of my favorite photos of the trip, though, because Sappo is in the photo.

We have lunch with Curt and John again and I get the first part of Curt’s story: how he paid for his first two kids’ hospital bills on a credit card, worked for Hughes Aircraft and his division folded, so he another guy started their own company.  It involved creating a device to lower an H bomb into a 3,000-5,000 foot hole filled with sand, concrete, etc. to test it. He also created machinery to support oil rigs and has three patents. He started the business in 1986 and sold it in 2006.  He’s been “between jobs” ever since.

As we are listening to Curt, something runs alongside our boats and settles in the brush next to us. Mark and I guess it’s a Jesus Christ Lizard, so I step out of the boat and stalk it with my camera. It’s a lizard of some kind, and it comes to rest on a branch overhanging the water. I get several photos and figure out later, it’s a wood lizard, our first.

Lunch ends and we go back to flogging the water.  At some point while in the rhythm of jigging, Mark says this was his most fun day because we’re into the groove, have a good sense of what works and what doesn’t, and we’re following Sappo’s advice to have one of us wake the fish with a top water bait and the other person follow with a jig or red and white Perversa or Yozuri. 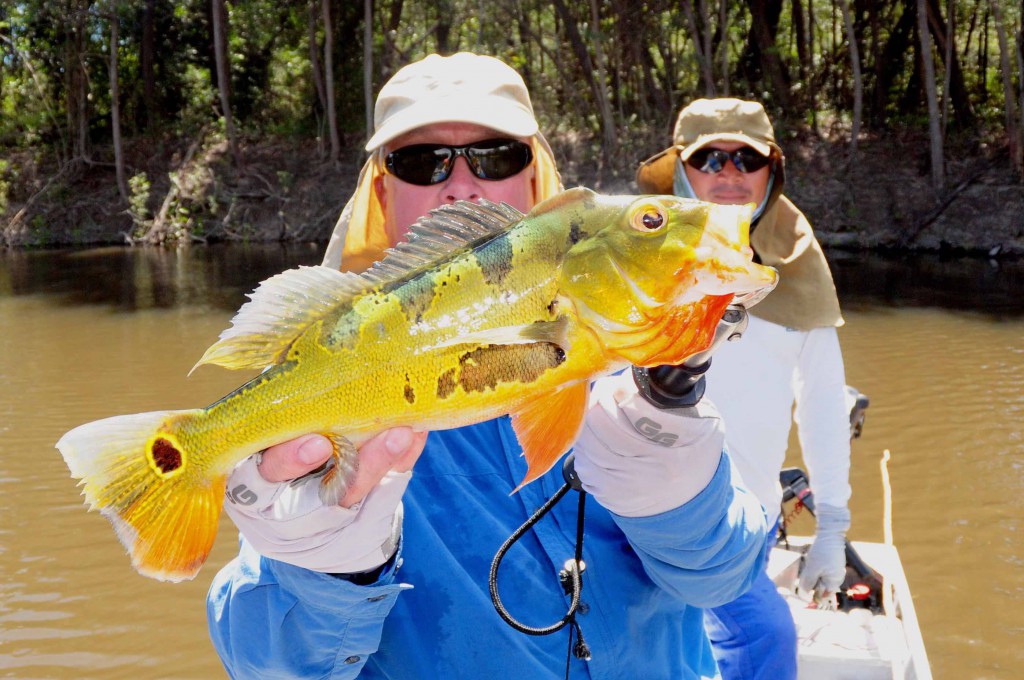 We’re back to camp by 5:00 to shower and enjoy cold beer on the hill with the guys.  Bobby hands me his cell phone and shares the latest Johnny Lee country song, about how things should be. It’s a great song. Johnny Lee is one of Bobby’s hunting clients, and it’s quite clear Bobby has a lot of respect for him.

At dinner, the conversation turns to politics and how the current generation of kids expects to be given things, including forgiveness for their tuition loans. Nobody gave us forgiveness for our loans, we paid them. Bernie Sanders gets no votes around our dinner table.

I mention my work on an employee engagement team and share hat while the Millennials coming into work are highly sophisticated in their use of technology compared to me, many grew up getting awards just for showing up and participating in something.  So they expect awards and acknowledgment and pats on the back.  Dr. Bob counters with, “I guess I’m just old school. I just want to tell people what and how to do something and expect it to get done. I don’t need to hear their ideas.” He said he got started in the Army and went into vet school as part of the Army. In that role, he also oversaw food distribution during the Vietnam War.   After the war, he went on to start up his own vet practice and farms the very farm he was raised on. He runs his vaccine business, too. I feel lazy and underachieving next to him…like I do next to the rest of the guys.

On the way back to our cabin, I tell Mark that it was a great day–the fishing was great, the weather great, my hands not too puffed up, and I liked chatting with the guys.  Mark said his highlight was holding a fish and noticing its heart beating.  We were too geeked in 2013 to notice such things.

We go to sleep to the sound of a tree frog calling from a tree outside of Curt’s cabin.  Our froggie pal emits sounds a lot like the sound of lures ripping across the water…all night long.