I was at work on Tuesday trying to be a good state worker when I got an email from Mark that was rather distracting.  He said that Todd, the nice fella that sent our mynah bird by plane three weeks ago, inadvertently mailed us another mynah bird.  “Mailed?” I asked.  “How do you mail a mynah bird?  And how did he ‘inadvertently’ mail it to us?”

Mark had no answers then and spent the rest of Tuesday trying to find the little mynah bird.  He talked to the Lansing Post Office, the Okemos Post Office, the Haslett Post Office, and to Todd.  Even after making a bunch of calls, Mark and Todd could not redirect the bird and send it back to Florida, or to Alabama which is where the bird was supposed to be delivered.  Todd said he felt horrible, because a trip for the bird to Alabama would have been much shorter than a trip to Michigan.

Mark and I waited around our house Tuesday night, hoping the Lansing Post Office folks would call to tell us the bird had arrived.  We went to bed wondering if the little bird would survive.

On Wednesday morning, after I got my blood tested, passed out, and was home recovering, Andy, from the Okemos Post, called to tell us the bird had arrived.  We asked Andy if he could tell if the bird was alive–it had been in a container, after all, for 38 hours.  Andy assured us the box was wiggling.

Within 10 minutes, we met Andy. 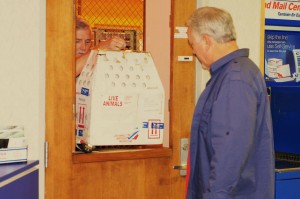 Andy handing Mark the box the mynah bird was shipped in.

Mark held the container on his lap all the way home.
Once home, we went into Little Buddy’s bedroom.  She sat on top of the big flight cage to check things out.
Mark cut open one corner of the strangely-shaped box. . .

After so many hours in a container with no water and what smelled like some pretty nasty fruit, we thought it best to get the new bird some fresh food and water.  So Mark gently grabbed her and put her in Little Buddy’s cage.  Little Buddy came right over to watch the new guy drink big gulps of water and eat.
About ten minutes later, the new bird came to the door of the cage and looked around.  Mark brought over a mynah favorite–a dried mealworm–and caught the attention of both birds.
Soon the new bird was hopping about the floor.  Then she took her first bath.
Now, the thing about this bird is that we weren’t expecting it, because if we had, we’d had asked Todd to sent it by airplane like he did Little Buddy because that was faster and less stressful on the bird.  Knowing the new bird had been in a container for 38 hours, we couldn’t bring ourselves to put the little bird back in the container it came in and ship it back to Todd or to the nice folks in Alabama who were expecting it.  Mark checked with Todd and he said he had another baby mynah he could send to the nice folks in Alabama.  We learned they weren’t happy about all this, but we hope they’ll understand that we did what we thought was best for the little bird.
We named the new bird BOGO–Buy One, Get One–in spite of the fact that we sent Todd a check for the little bird, and for its lovely ride inside numerous US Postal Service trucks. 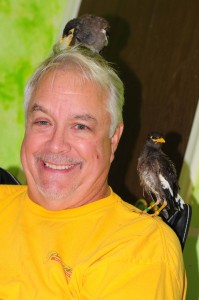 Mark with Little Buddy on his head (parting his hair?) and a wet BOGO on his shoulder.

Surely a bird on the head is worth two in the . . . something.
Scroll to Top