The fact is, I almost didn’t go on the trip I’d planned with my Snowy Hoot-ers pals a few months ago, because the day we were to leave was two days after my dad’s funeral.   But Brenda and Sylvia encouraged me to drag my grieving self along and it turns out they–along with a few margaritas and some quality time on a river–was just what I needed.

Things didn’t start out so well, because we didn’t even get out of Brenda’s neighborhood before we saw a dog that had run away from its owner.  The three of us like dogs as much as owls and rivers, so we stopped so Brenda could take the dog back to its home. 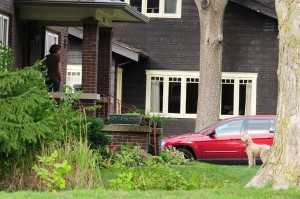 Brenda at the front door while the dog looks on by the car.

Three hours later, after settting up camp, I realized I had not only come without a fishing pole, I had brought a kayak without a paddle.  No worries, they said.  Brenda had brought an extra pole for me, and we simply made arrangements the next day with a livery for a ride to the put-in spot on the river and to borrow a paddle.

With details for Saturday figured out, we headed to downtown Beulah, MI to my all-time favorite restaurant, the Roadhouse Mexican Restaurant and Cantina.  They serve some great food and their margaritas are ones I dream about.

We only had one margarita the first night because there were fish to catch, we heard, at some local lakes.
We each caught enough fish to verify that indeed, there are fish in the local lakes.  We also saw a loon way,way off in the distance.
The next morning we took to the river . . . with a dozen Boy Scouts.  See, it’s cheaper go with a group than to get a private escort, and we’re all about saving up for more margaritas.  We dashed to get to the river before the Scouts. 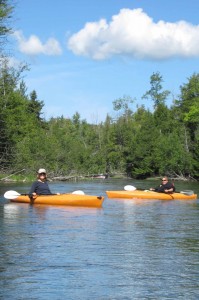 Brenda and Sylvia on the Platte River.

And that gave the Boy Scout plenty of time to catch up and pass us . . . sometimes.  Other times, the Boy Scout demonstrated at our good fishing holes that the upper Platte does indeed have a 50% tip-over rate.  We’d guess that at least half of the Scouts ended up in the river.

Meanwhile, we paddled on. 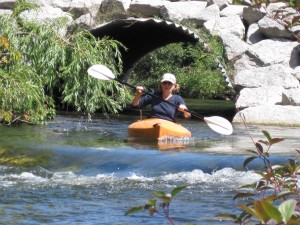 Brenda about to go over some rapids.

Since Snowy Hoot-ers are into birds, I had to stop to photograph the flock of cedar waxwings that seemed at times to be following us down the river.  We also saw kingfishers and a great blue heron.

Afterwards, we returned to my favorite restaurant to suffer through more great food and margaritas. 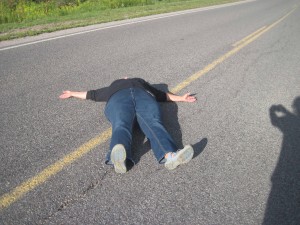 Sylvia lying in the middle of a road.

After extracting Sylvia from the road, we wrapped up the day with a roaring fire. 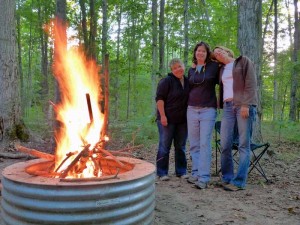 Indeed, a camping trip with my pals was the best thing I could have done.  It was the kind of fun my Dad had throughout his life with his friends and family.  It also turns out that where I went camping, paddling and fishing was where my Dad used to go to a hunting camp to spend quality time in the woods with his gun.

Oh, and watch out Boy Scouts–the Snowy Hoot-ers have more trips planned for the future.